On day 8 they were still very downy, but starting to develop feathers: 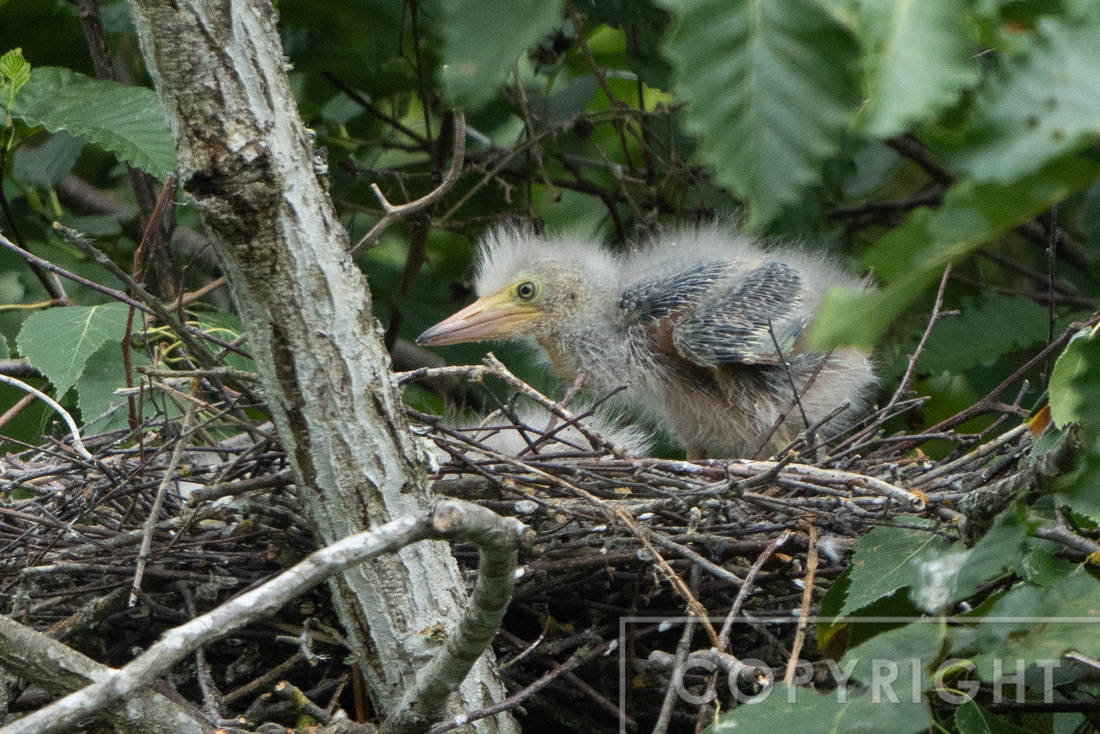 They also were trying out those wings, hoping to figure out what these appendages were for: 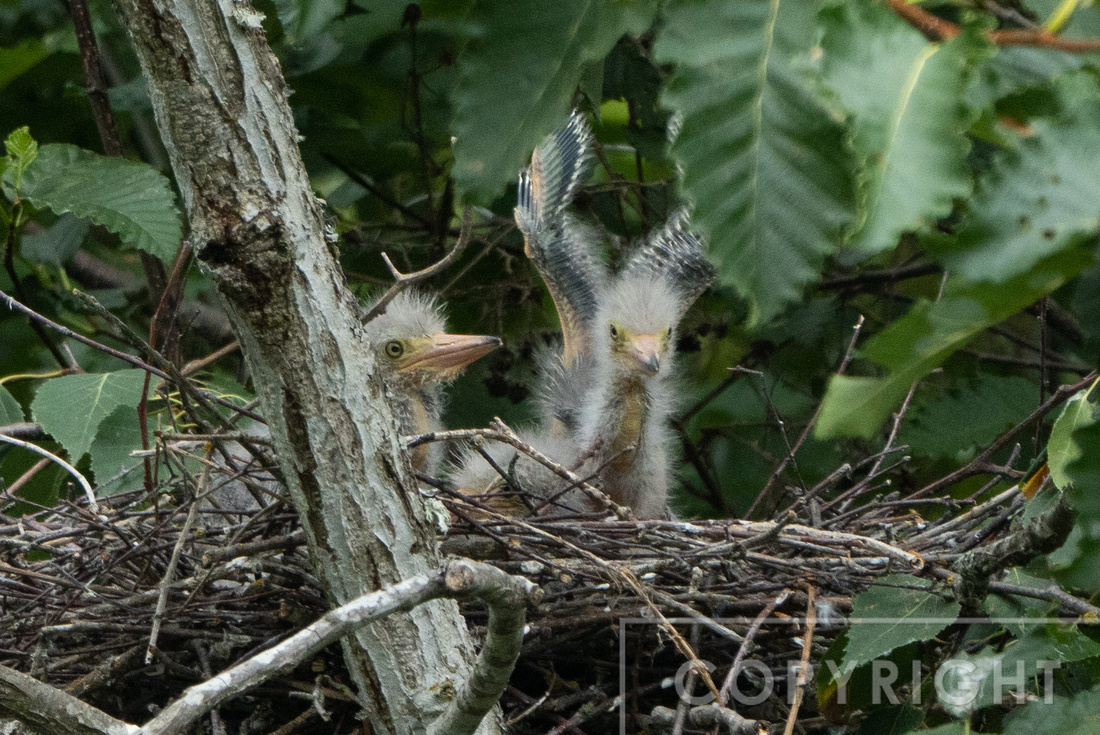 The challenge of photographing chicks in a nest is the uneven light. Sun becomes your enemy. On day 8 we had some clouds, enabling us to get better video:

Day 9 also had some clouds, enabling a more even exposure. You can see the beginnings on feathers on those wings: 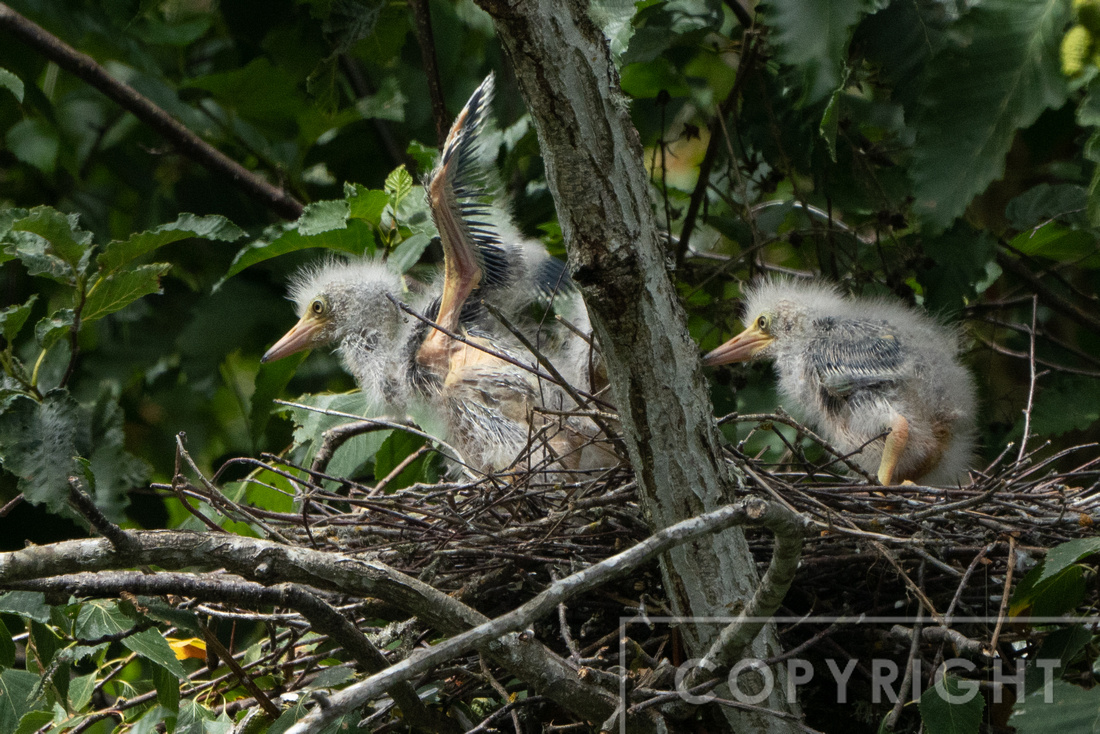 We started getting some good views of the chicks feeding. They grab onto the parent's beak and pull it down, forcing the parent to regurgitate the food: 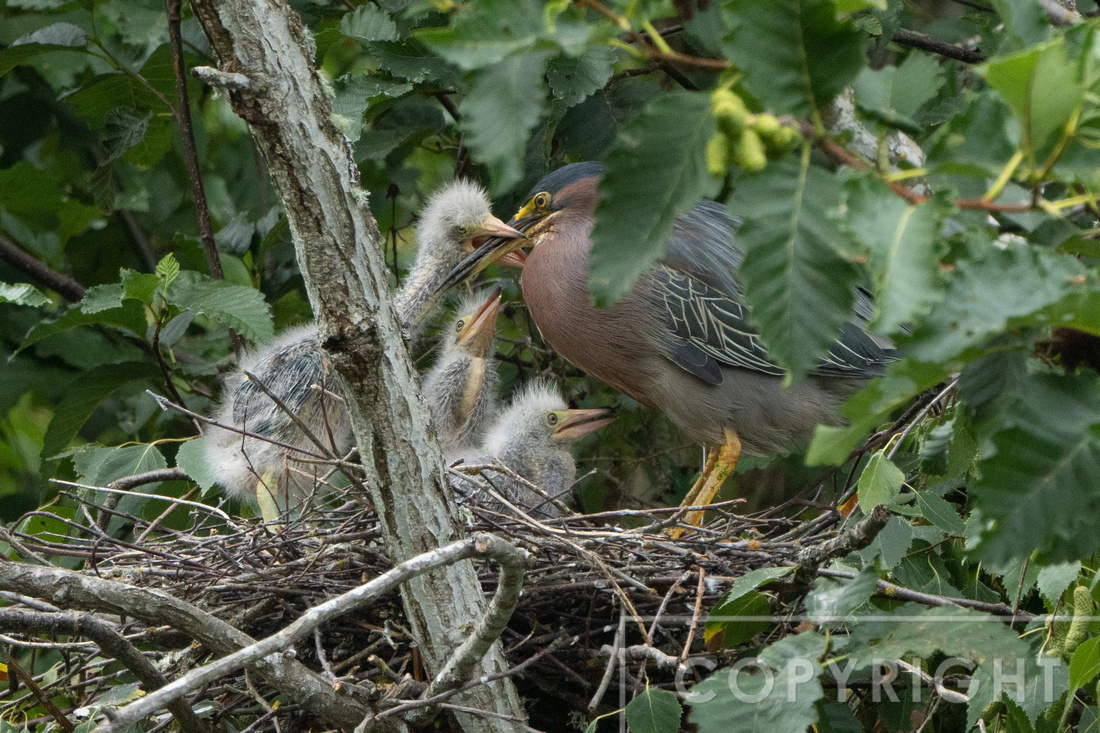 This is the best video I have of a feeding. There are two separate feedings in this one video:

Day 10, the chicks are still hanging out under parent: 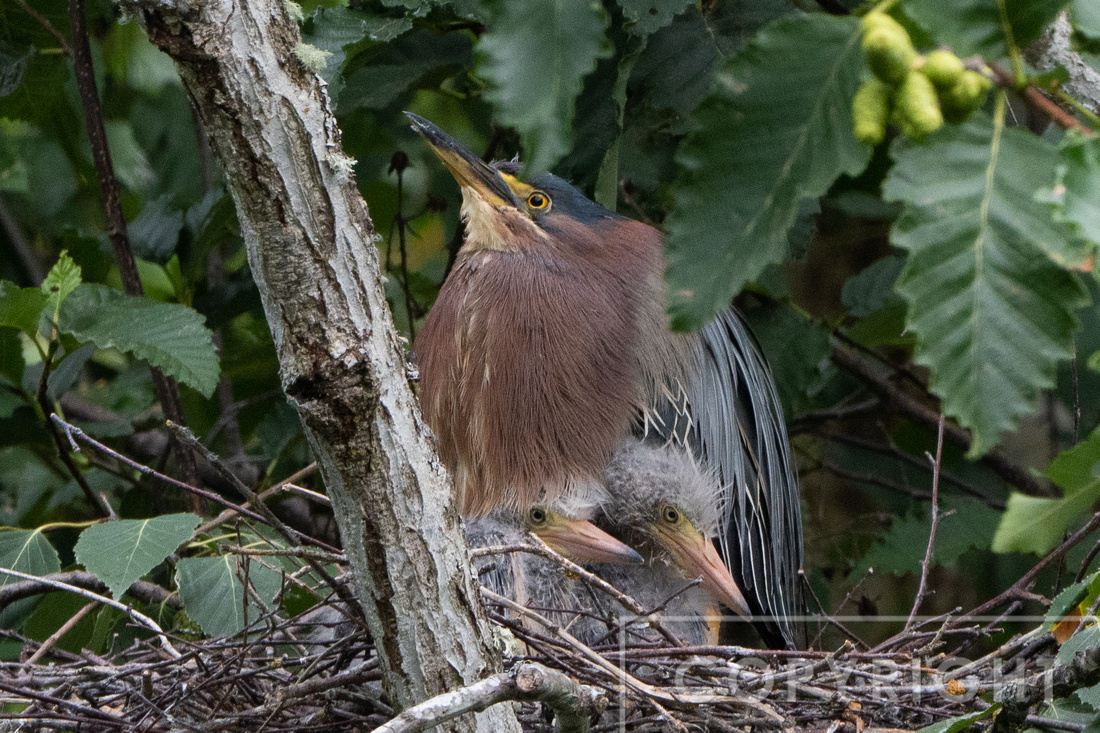 For most of the other videos, the soundtrack was removed, but for this one it was kept it in to show what the birds were reacting to:

On day 9, we saw many instances of the parents refusing to feed the chicks. Had the soundtrack been kept in this video, you would have heard me gasp. The video was slowed down to allow a better view of the interaction:

It is not clear why the parents went to the nest at all, because they did nothing but block the chicks from trying to feed:

This is a good example of what we were dealing with when the sun came out. It is much harder to see with the light and dark areas:

A favorite moment, as the chicks were learning to explore their world:

Day 11, and the chicks are stretching out those growing wings: 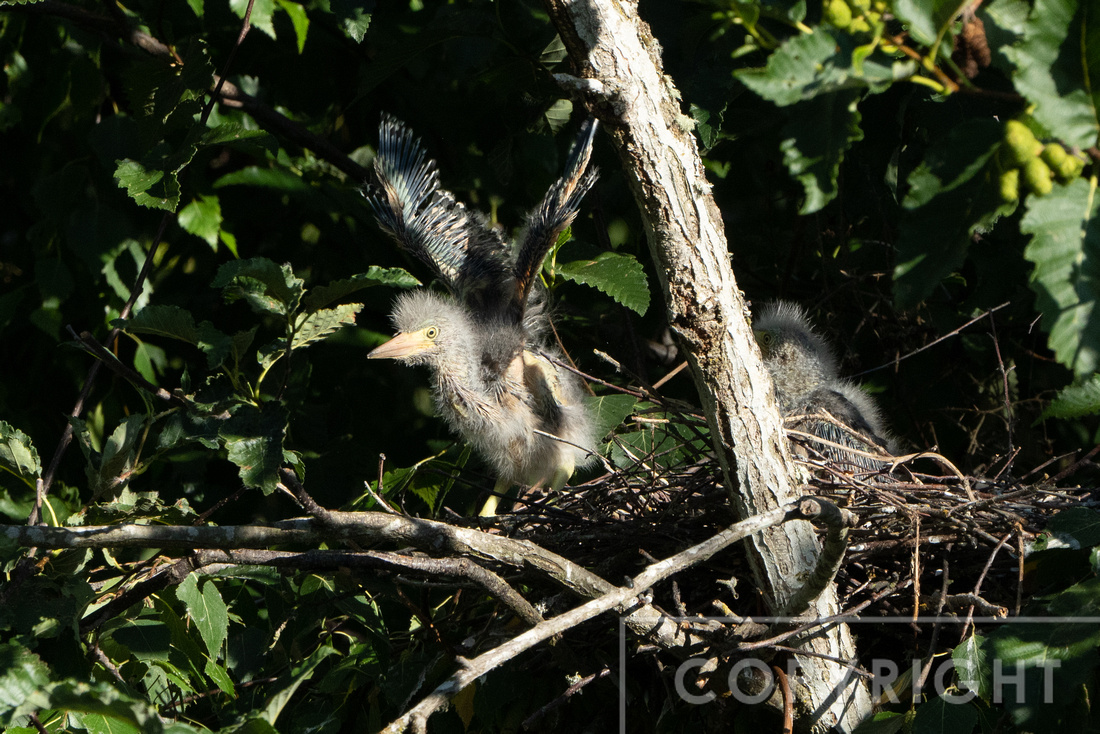 You can see the color starting to develop in those wing feathers: 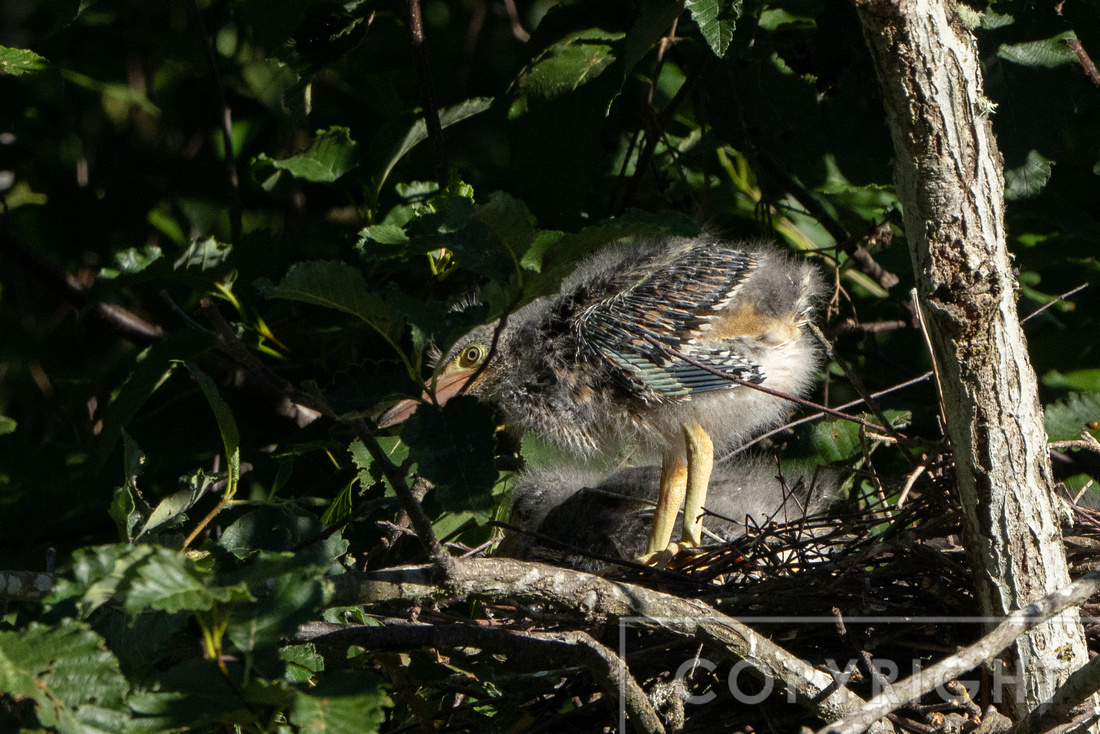 Day 12, it was so cute watching the chicks interact: 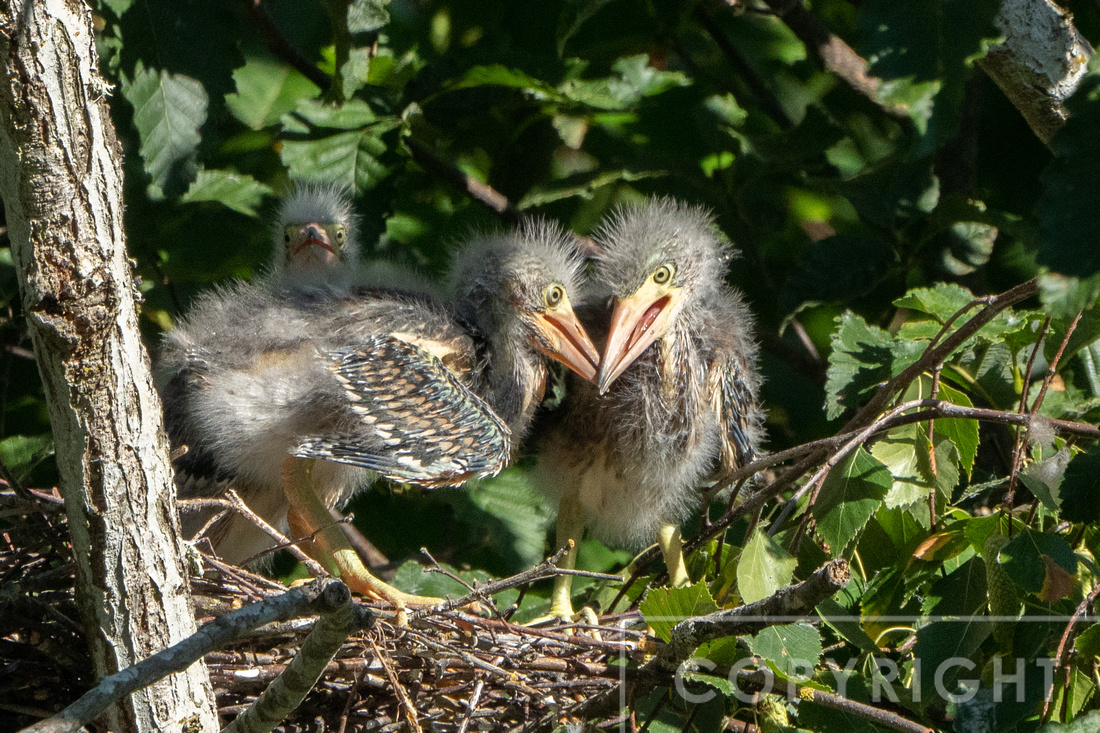 They are getting a better and better idea what to do with those wings: 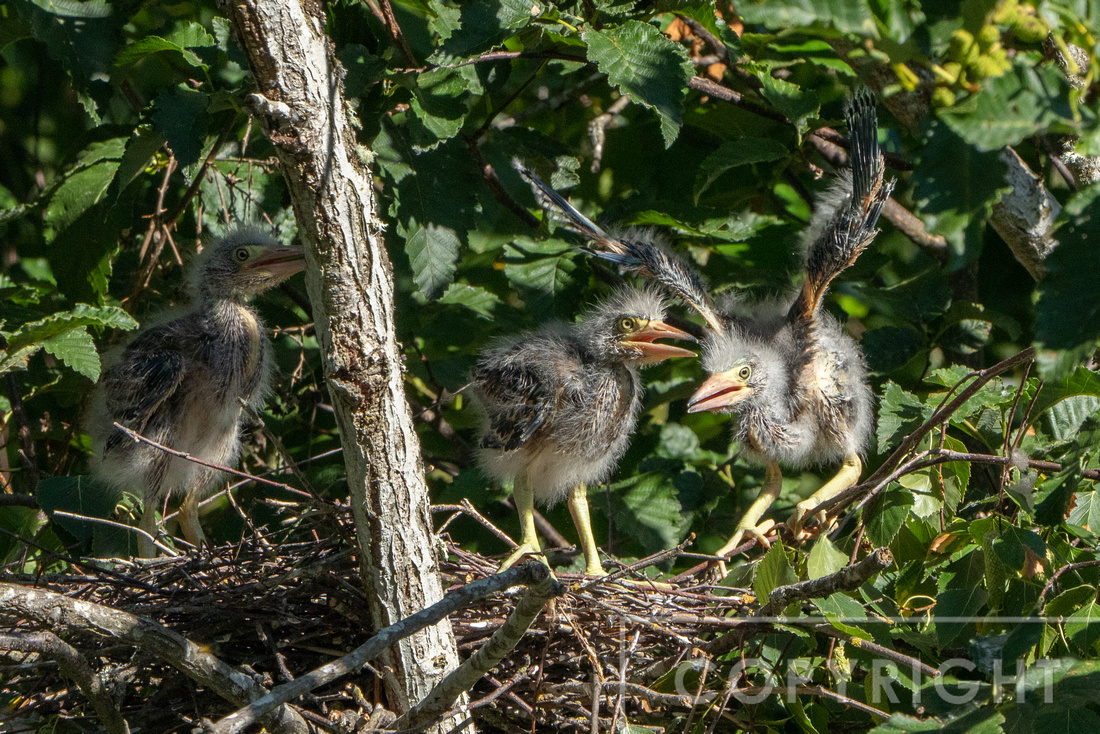 When the wings are not outstretched, the chicks still look so young: 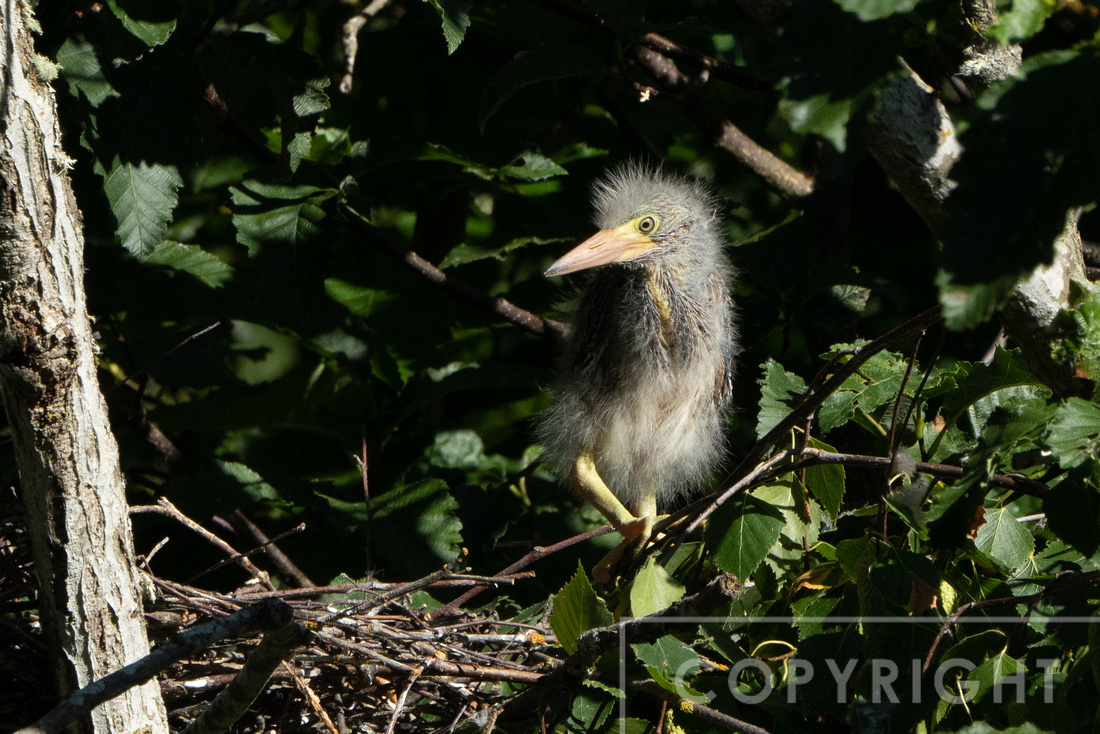 There are a number of interesting things in this video. The chicks are aware that the second parent has arrived, but it does not stop them from trying to get a feeding from the first parent. Also, it is always interesting to see how the parents greet each other:

Starting to venture a bit out of the nest: 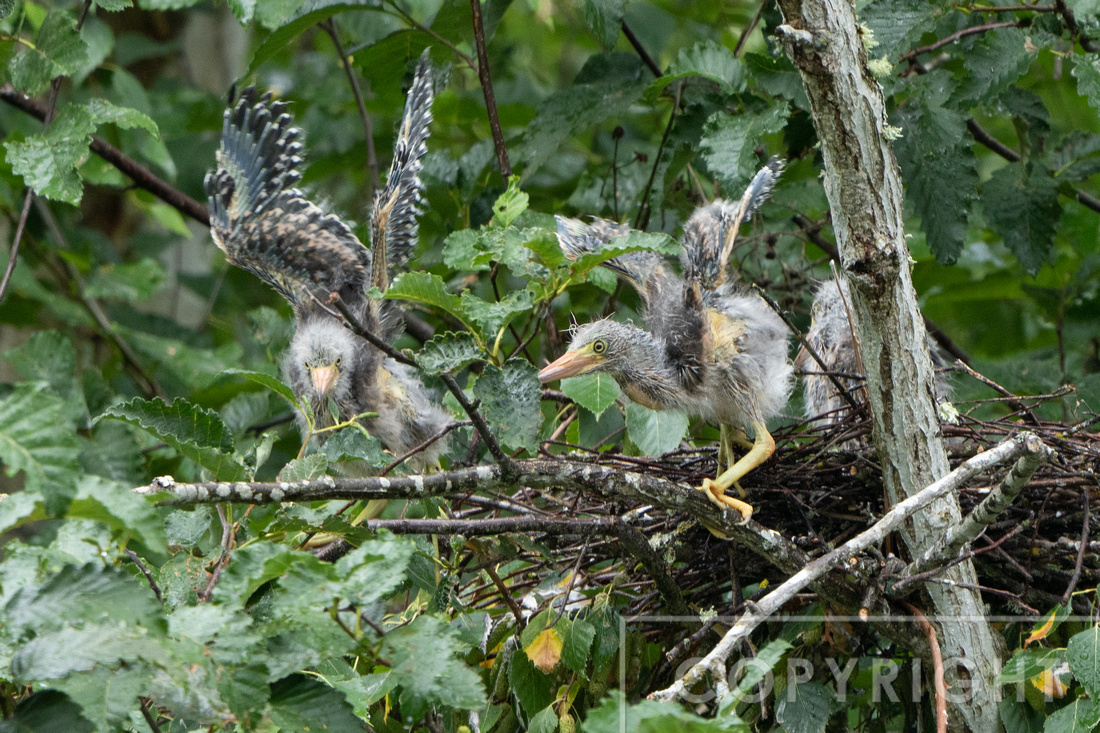 Getting comfortable with the idea of being out of the nest: 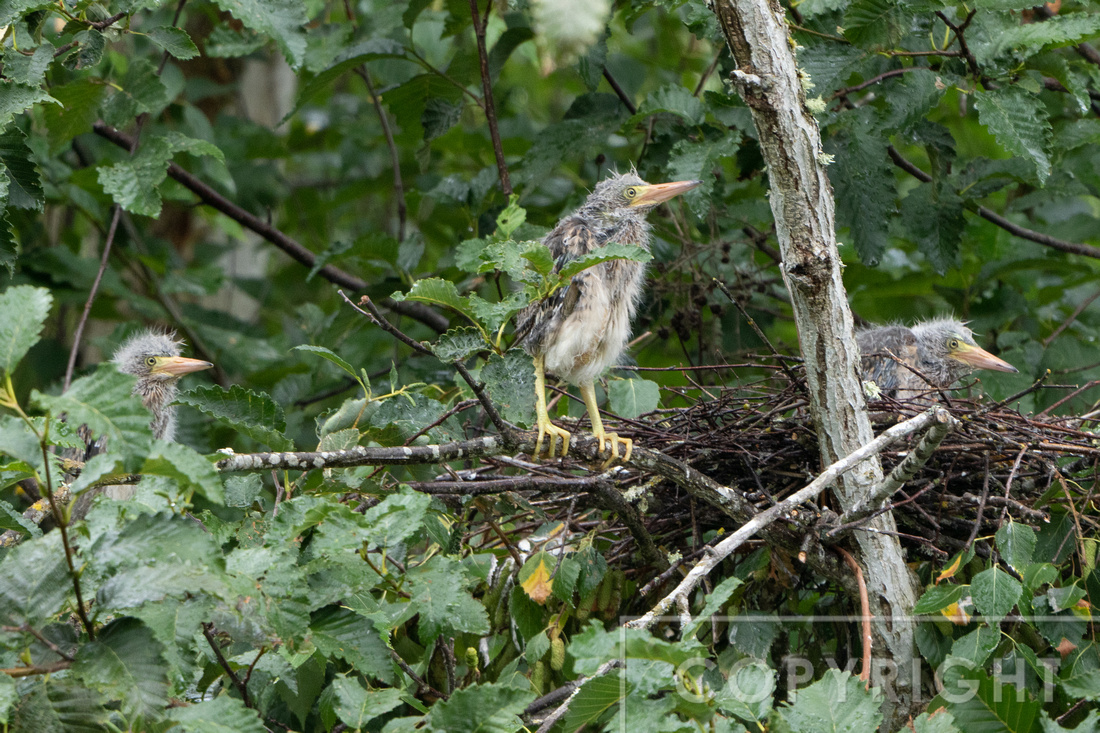 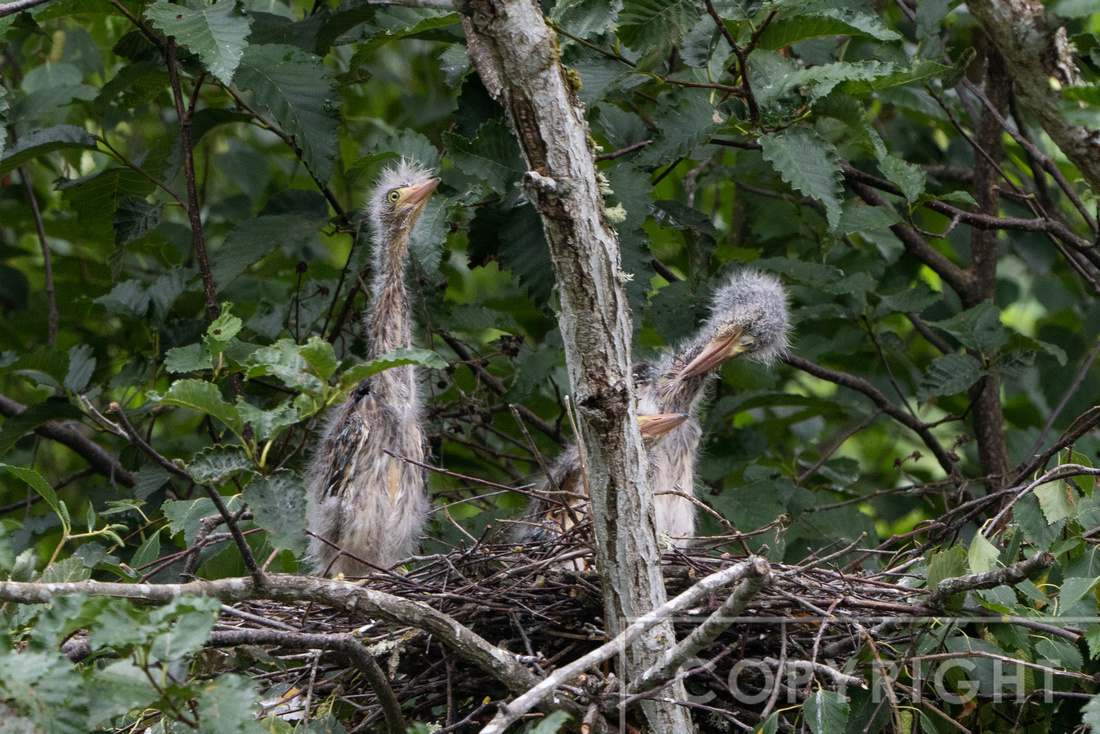 The chicks were getting more and more active, and preparing for that all important step up and out of the nest:

Day 13, on the cusp of learning to leave the nest: 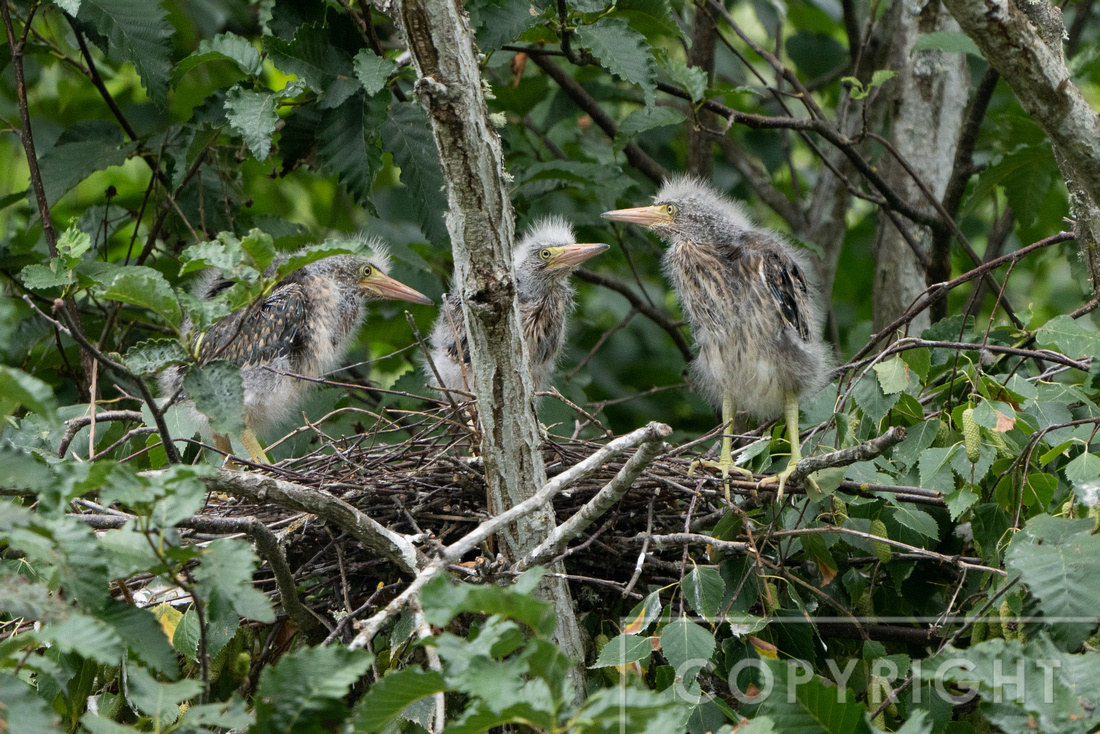 And they are out:

Truly branching out. The chicks ventured about 15 feet away from the nest: 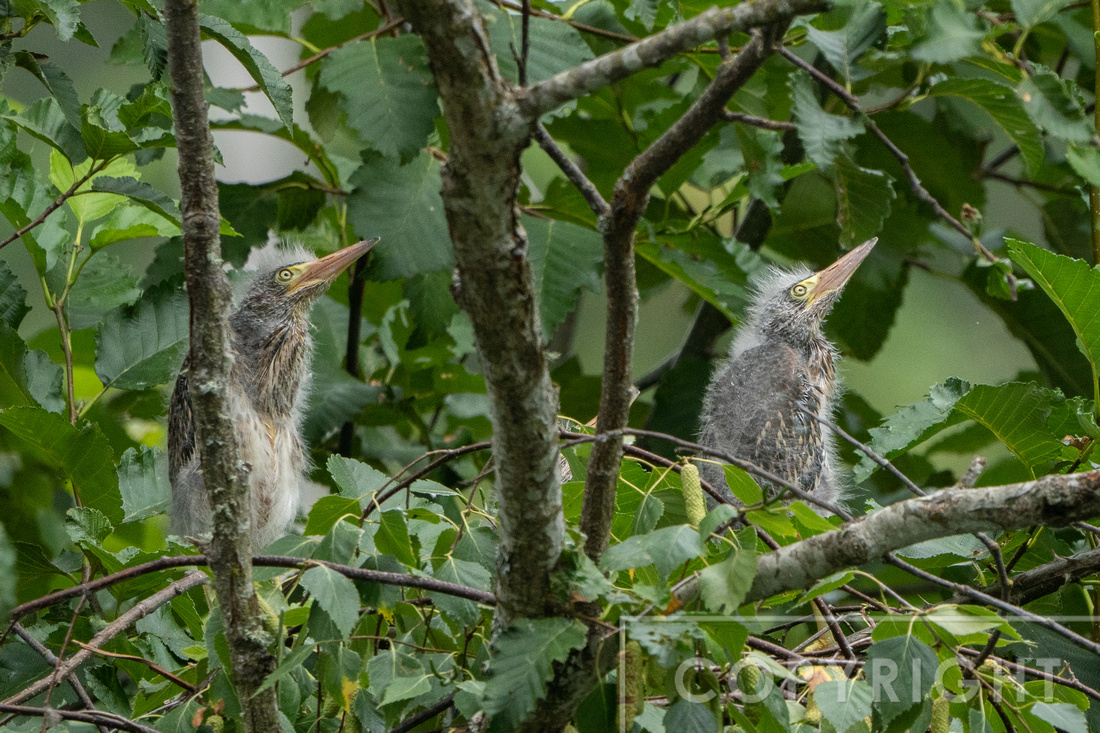 Week two was highly entertaining. They went from little fuzz balls just developing feathers, to teenagers branching out. We were so fortunate to have good views into the nest to be able to document all these changes.