For the first time in my life, I found a Green Heron nest. They are notoriously difficult to find, because they are normally buried deep in a tree, and very difficult to see. I was kayaking in June, and saw two Green Herons mating in a tree. Lo and behold, they were in a nest. 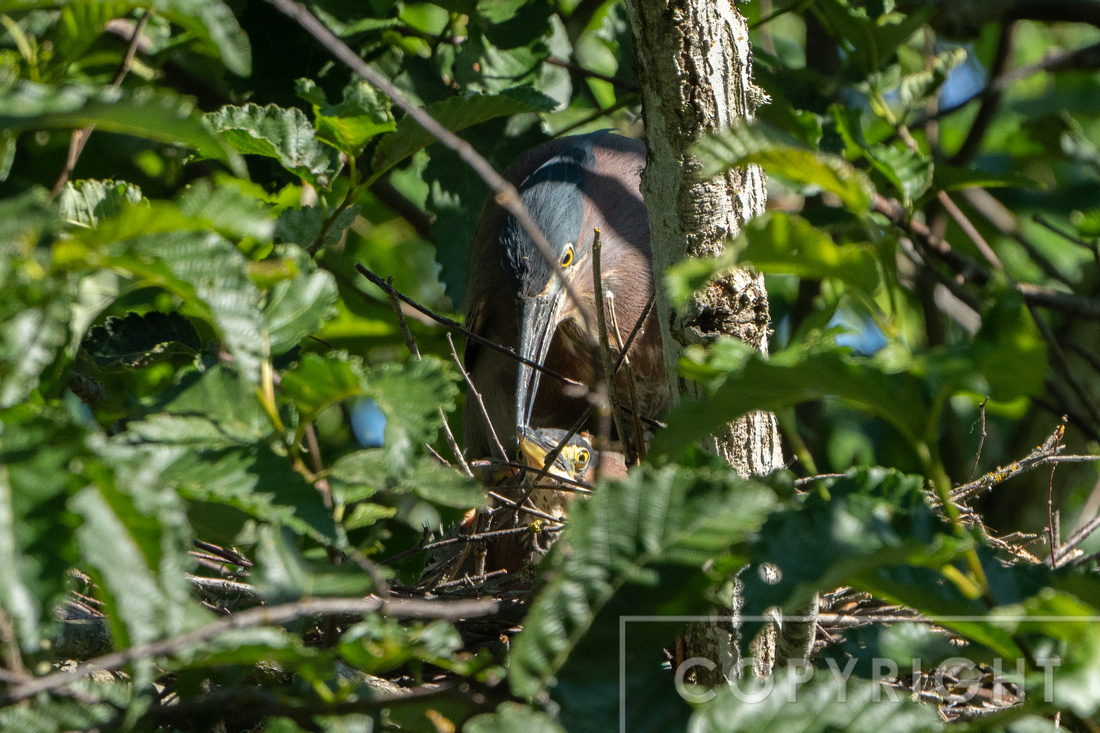 I then did the math to figure out when the chicks should be hatching. My calculation was that the first possible time to see the chicks was on July 6th. Also crucial to this caluculation was finding a good observation spot. The kayak was too close to the nest and too disruptive. My friend Deena and I figured out that there was a spot on the nearby bank that was near the nest site, that was a perfect observation spot. It was on the south bank of the river (nest was on the north bank), so the lighting would be good, and we were far enough away to be non-disruptive. Being on land also allowed us to set up tripods, which makes video possible. Amazingly, there was pretty good visibility into the nest, which is almost unheard of.

We were not able to get to the nest until July 8th, but this is what we found: 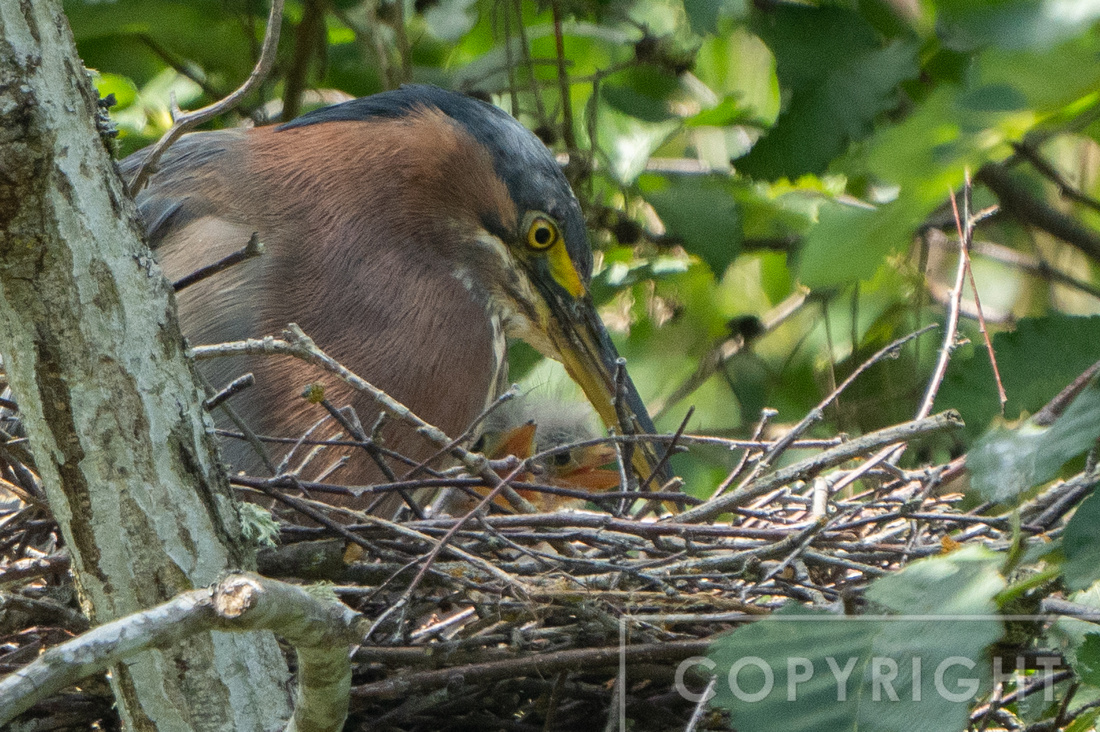 There is a good chance these chicks were a day or two old at that point, but for record keeping purposes, this was referred to this as day 1. We were able to observe our first feeding. Watch the video all the way to the end:

The adult will regurgitate the food, then re-swallow anything that is not eaten. Seems pretty efficient!

Days 2 and 3 were challenging, photographically speaking. There were very few good views of the chicks. 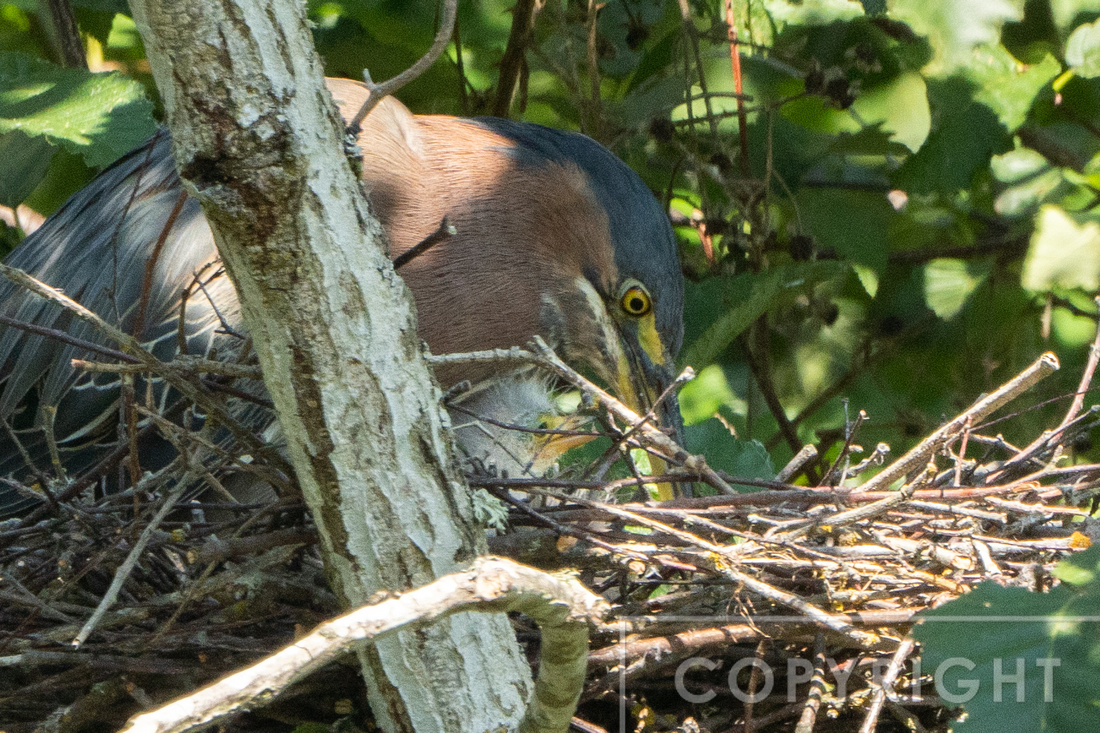 There may not have been many good stills of the chicks that day, but we started observing what I referred to as the "Changing of the Guard". Mom and Pop trading places:

Day 3 was also not a great day for chick sightings, but day 4 was when we finally started getting some good views: 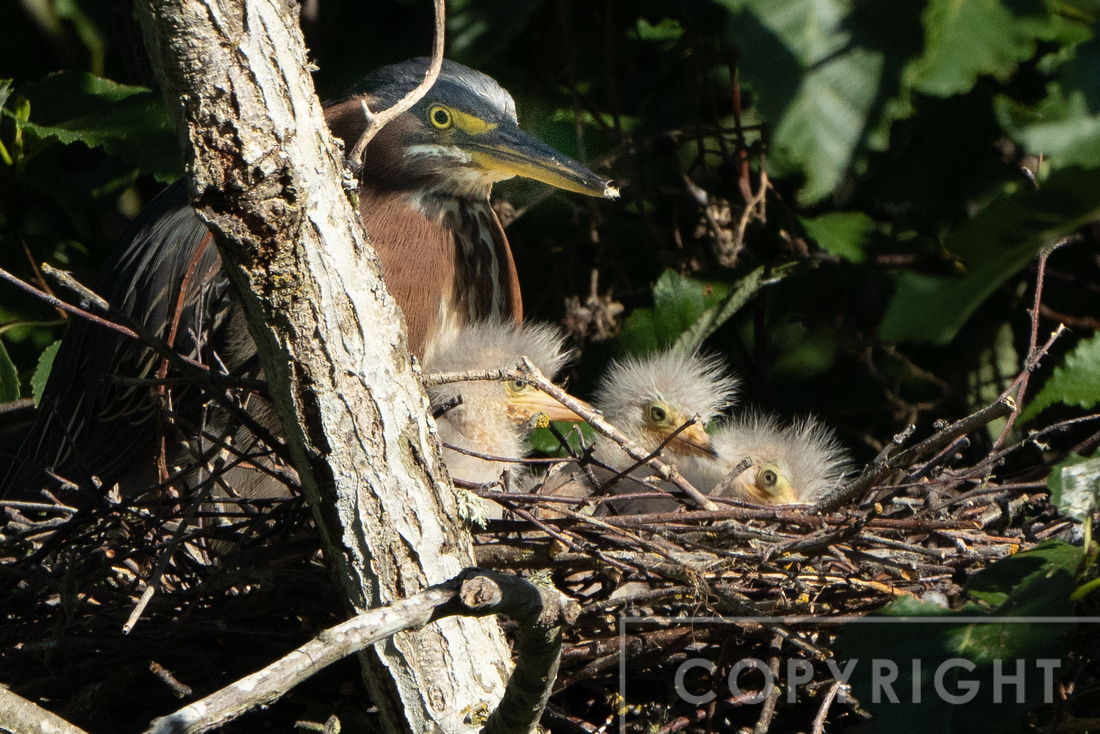 We now knew that there were 3 chicks. We also got our first glimpse of how the chicks communicate to the parent that they are hungry:

By Day 5, the chicks were getting big enough for us to see them really well. Look at the size of that lower jaw! 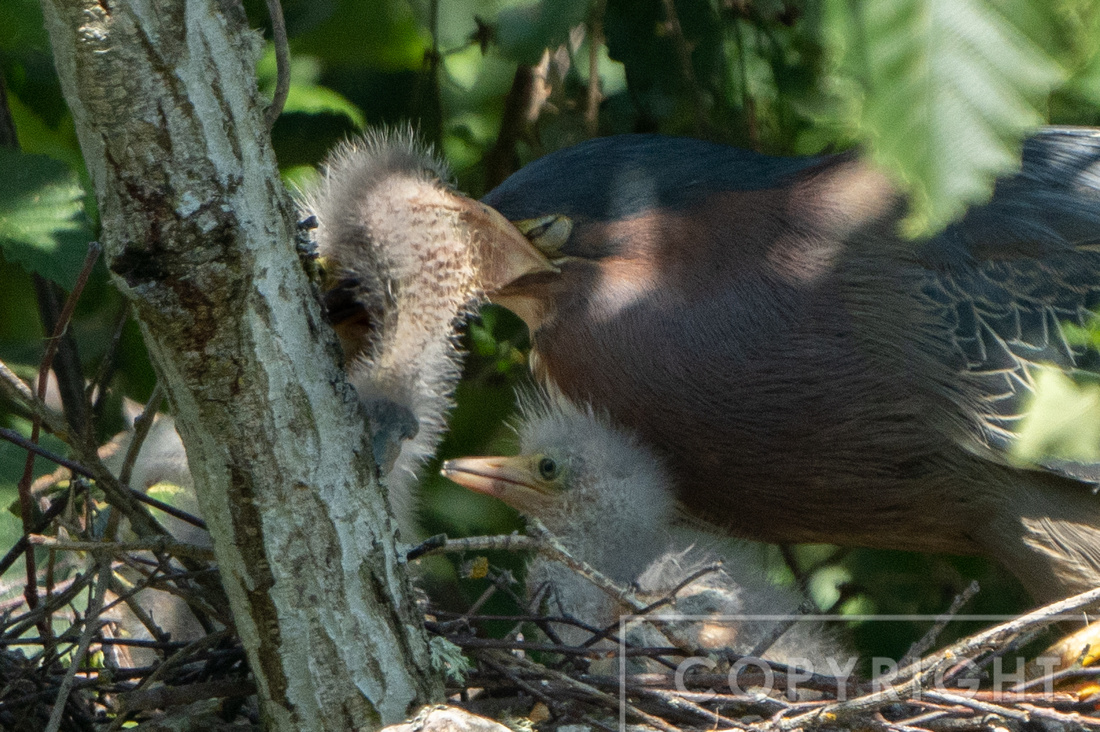 By day 5, we were also getting really good glimpses into how the parents interact with each other:

It would be great to know what this behavior is about. The departing parent bites at the beak of the arriving parent, then runs its beak along the length of the bird. We saw this behavior repeatedly, really interesting!

Day 6 provided a chance for a good clear view of the chicks begging for food. 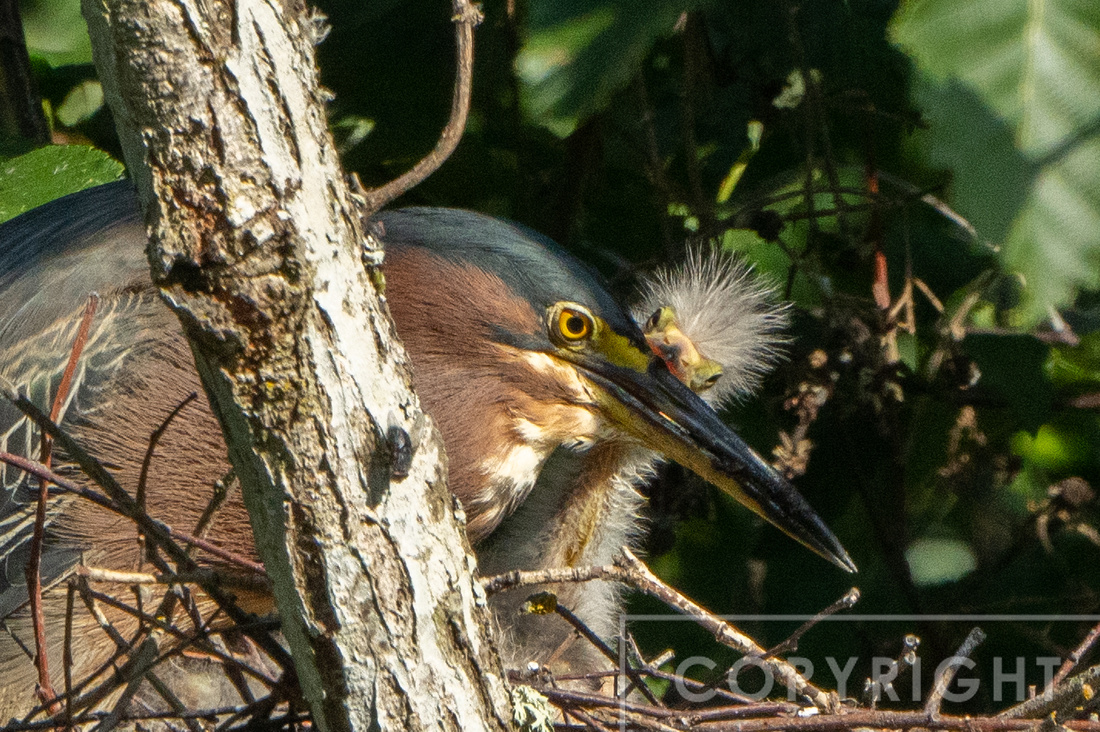 We also got good views of the chicks feeding:

The chick was not able to swallow that entire fish, but he sure tried.

Day 7, the chicks are getting so big: 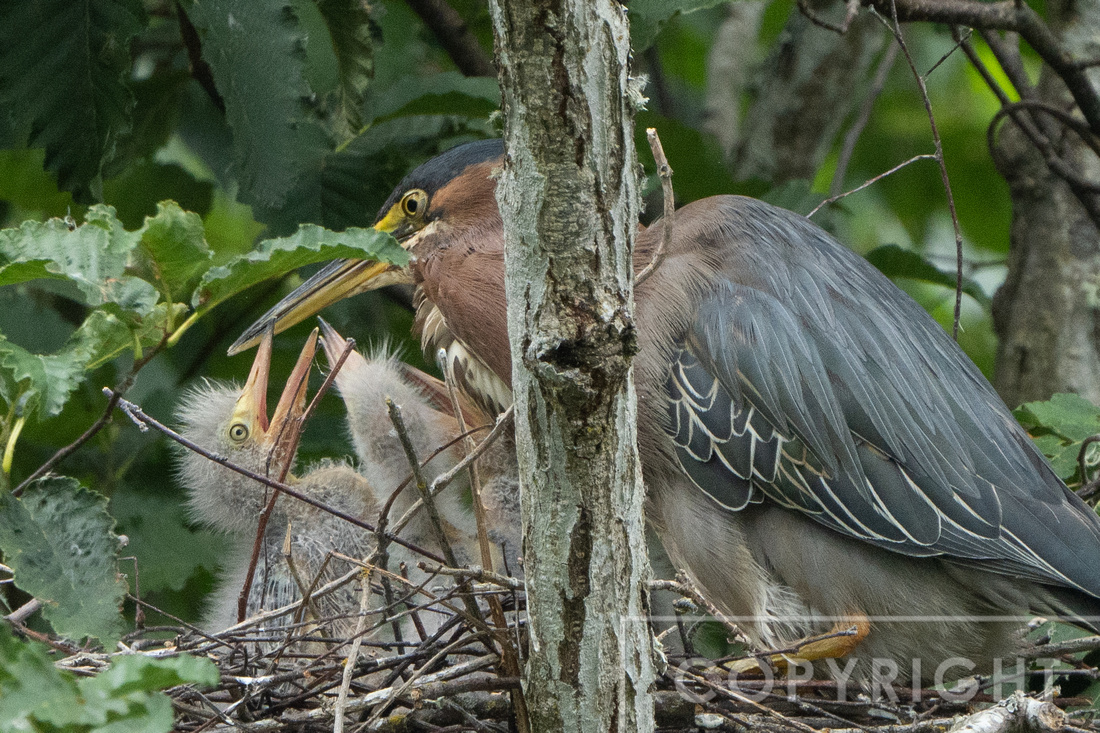 One of the best views of a fish being regurgitated: 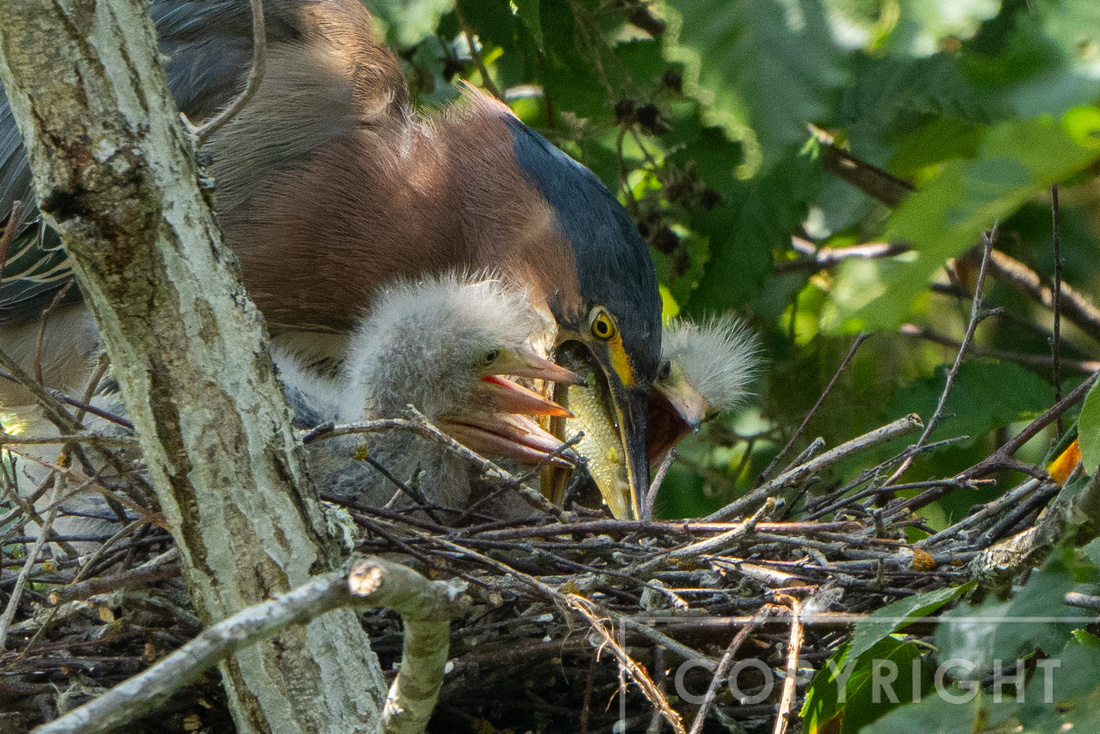 Another changing of the guard on Day 7, and our first chance to see how the chicks keep from smelling up their nest with poop. It was especially cute since the chick chose to poop betweem mama's legs:

I will post a blog for each week of their development. It was a total joy and an honor to follow this very special nest.