It has been a joy to follow this nest for the past month. The chicks are now getting ready to fledge and find their way in the world.

Day 22 - The chicks are still tied to the nest, but look how big they are!: 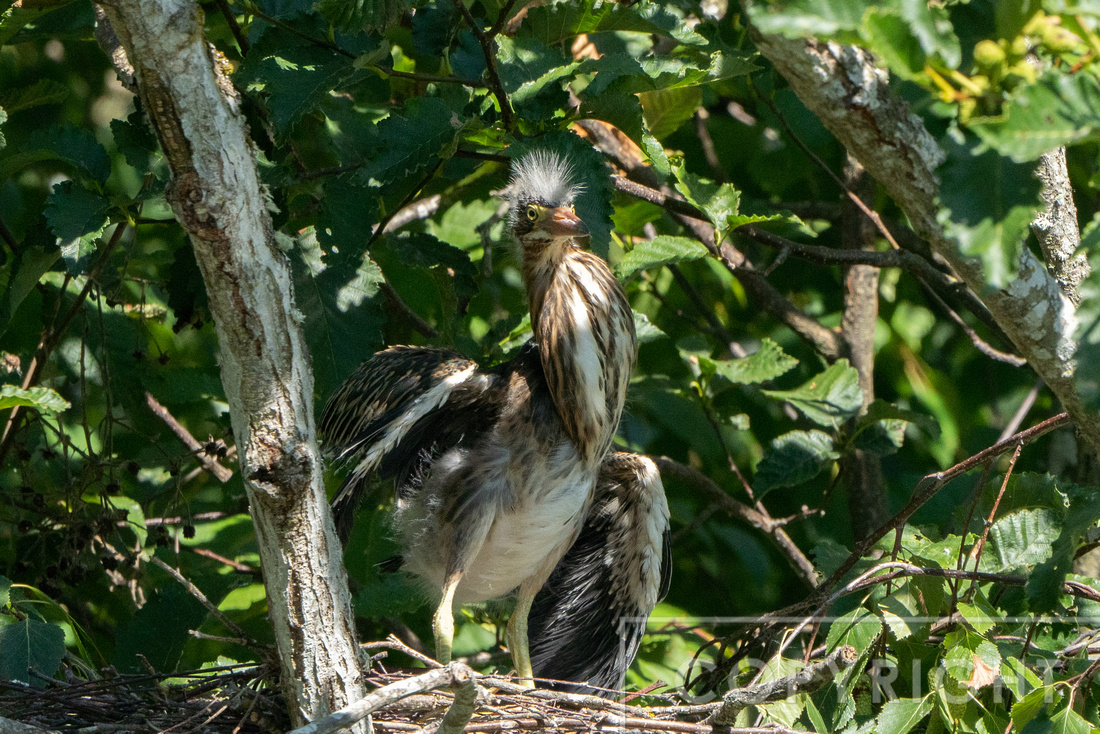 On Day 22, I witnessed my first short flight. At this stage, they could only fly a very short distance, and only to a lower elevation: 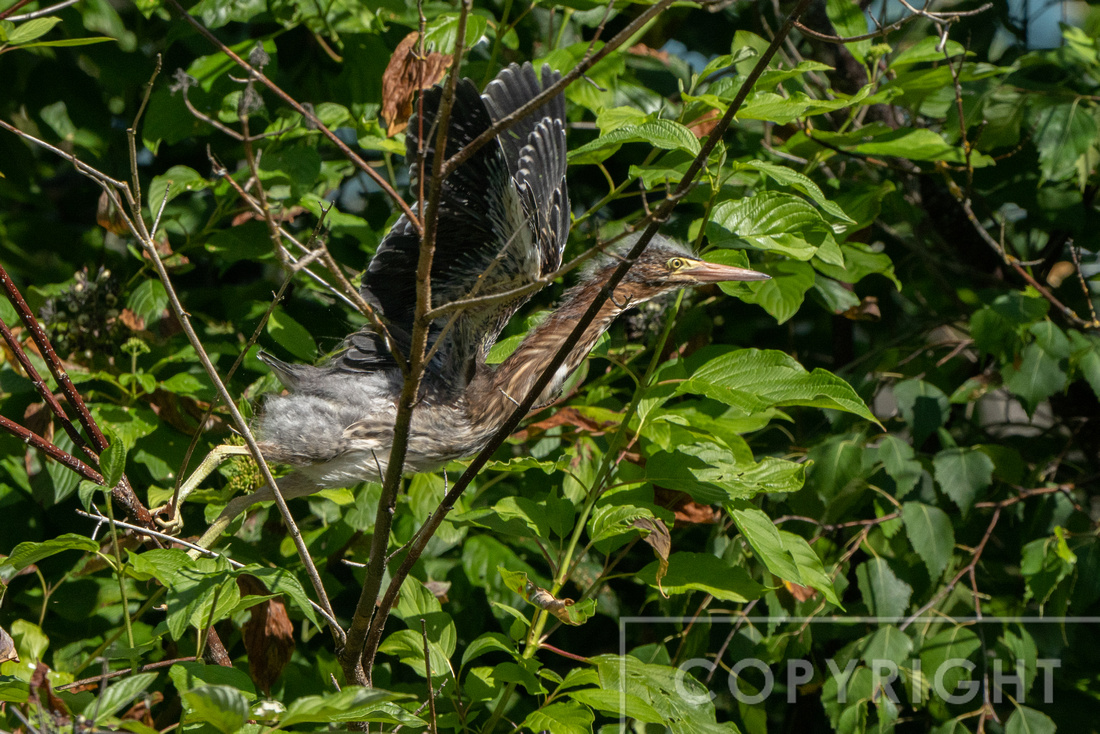 Since they could only fly down, they had to climb back up to the nest. This one was trying to navigate his way back up: 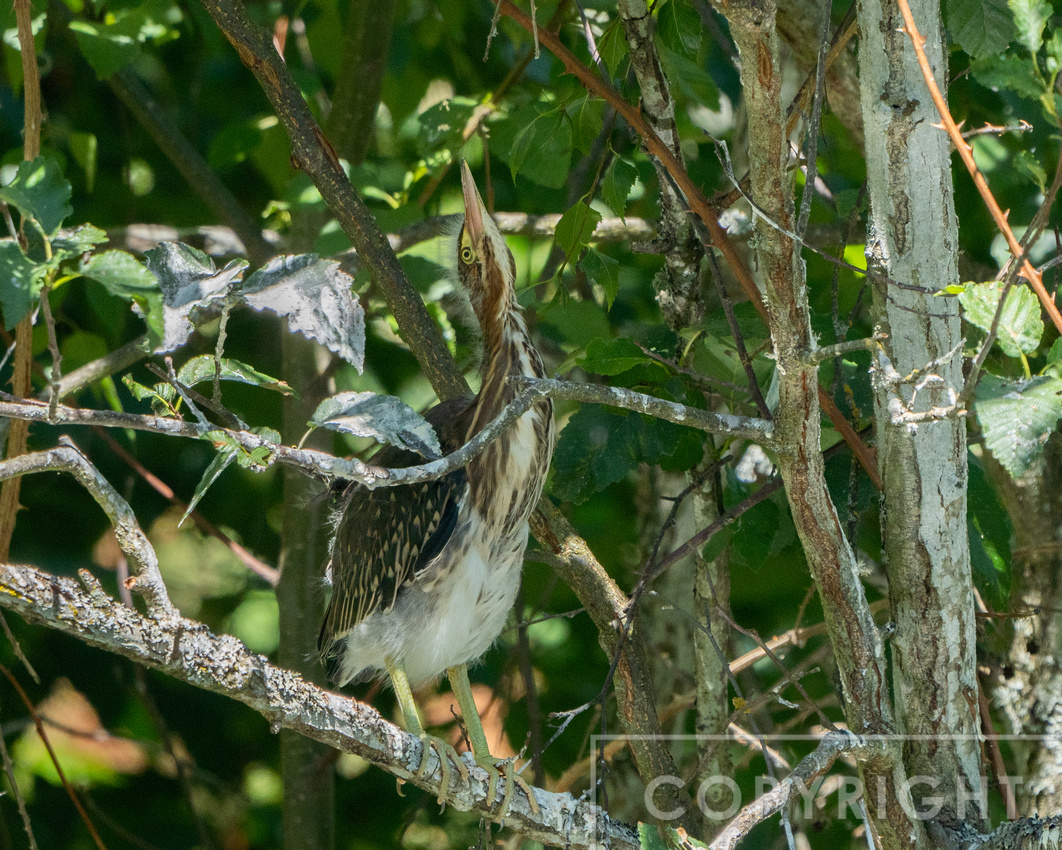 Day 23, the nest was still their home base. They would return back for a rest after venturing to the outer branches of the nest tree: 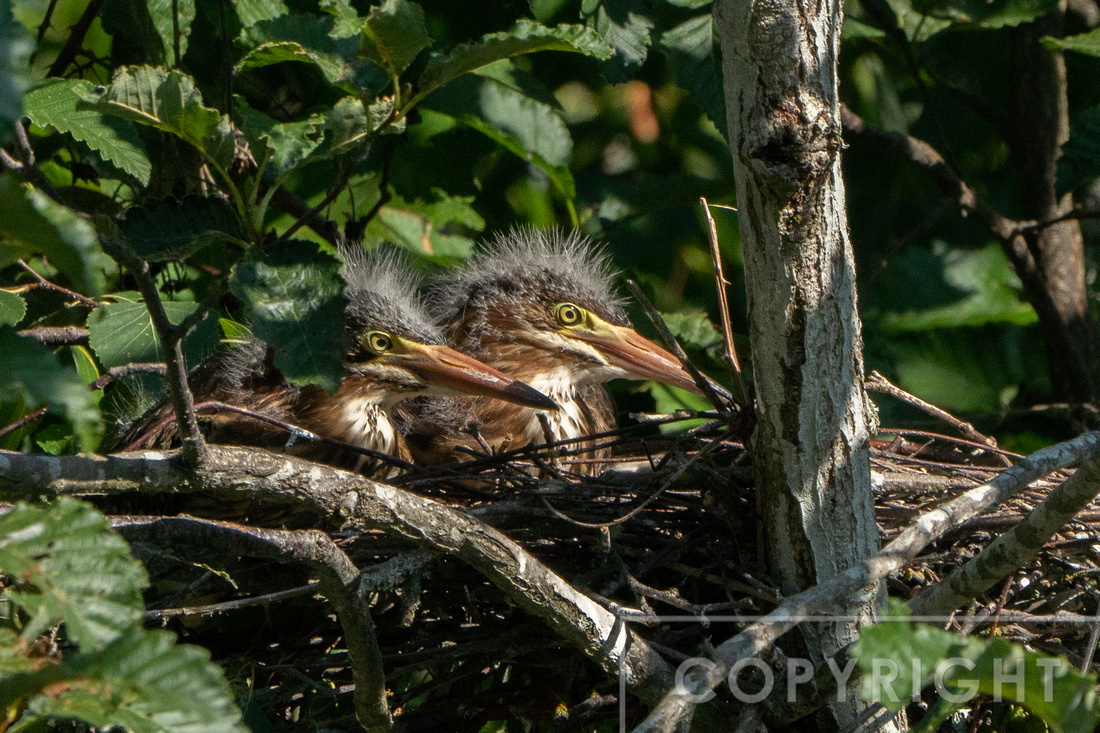 Day 24, they are becoming more aware of the world. In this case, a Kingfisher was flying by and making quite a racket: 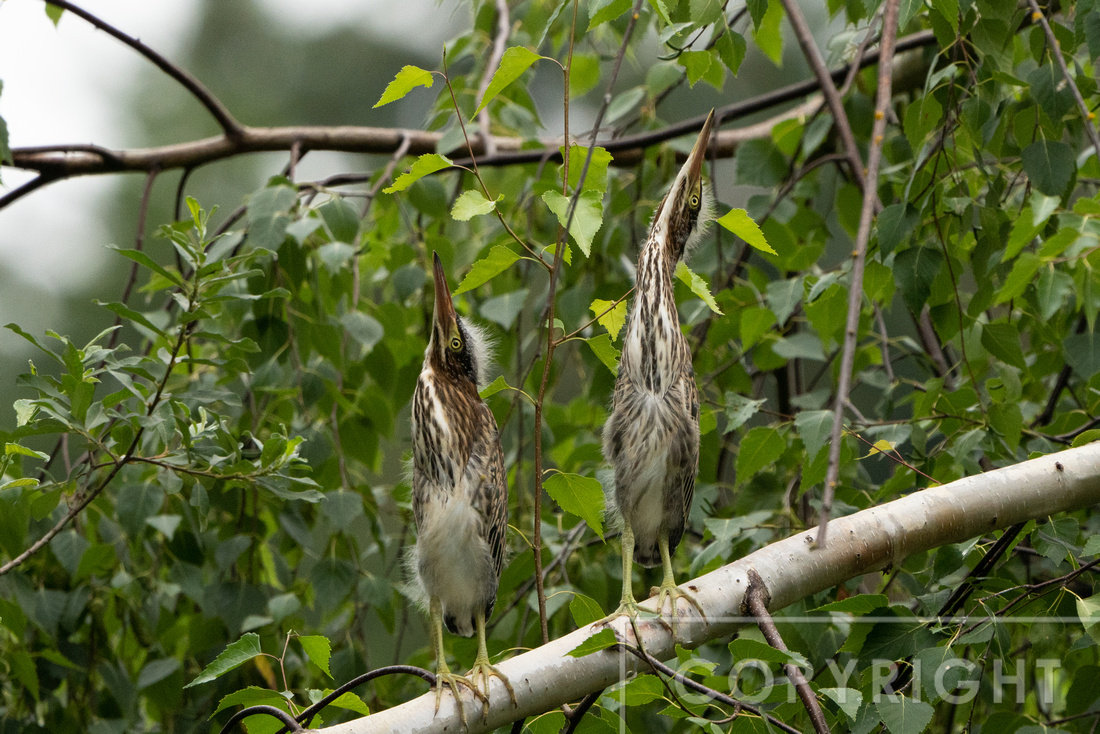 On day 24, the nest was still their home base: 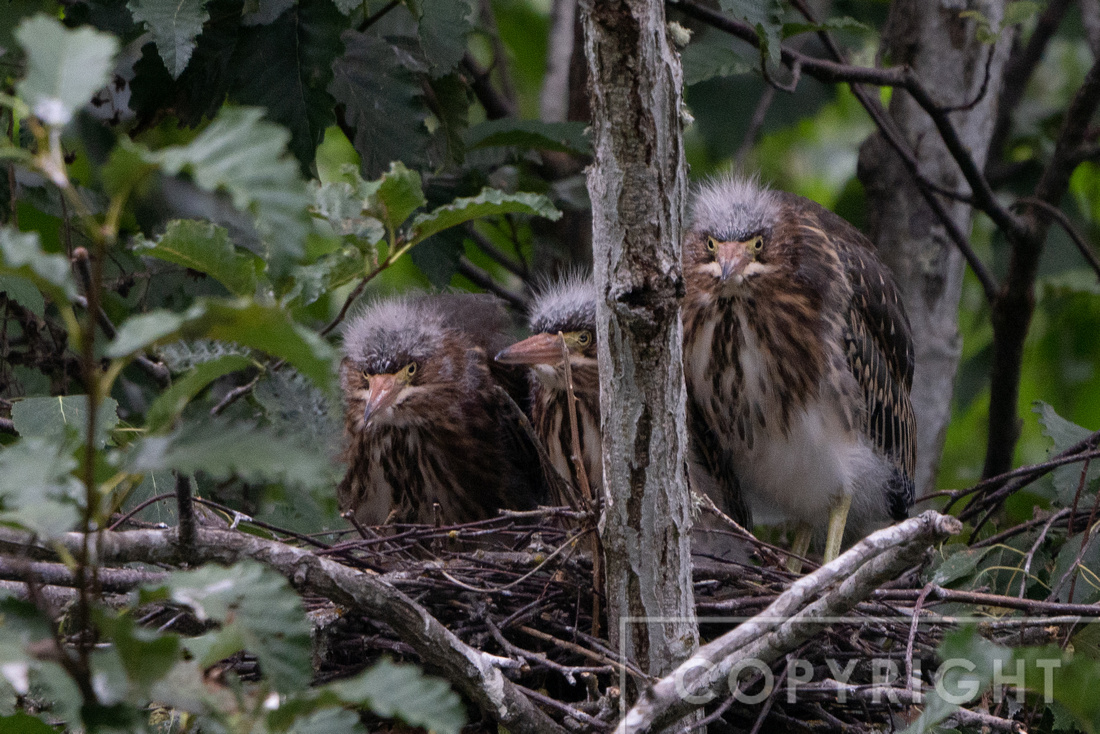 Another short flight, again, not yet able to fight gravity:

Day 25 - This very proud little guy flew all the way to a floating log. It was my first time seeing them fly away from the nest tree: 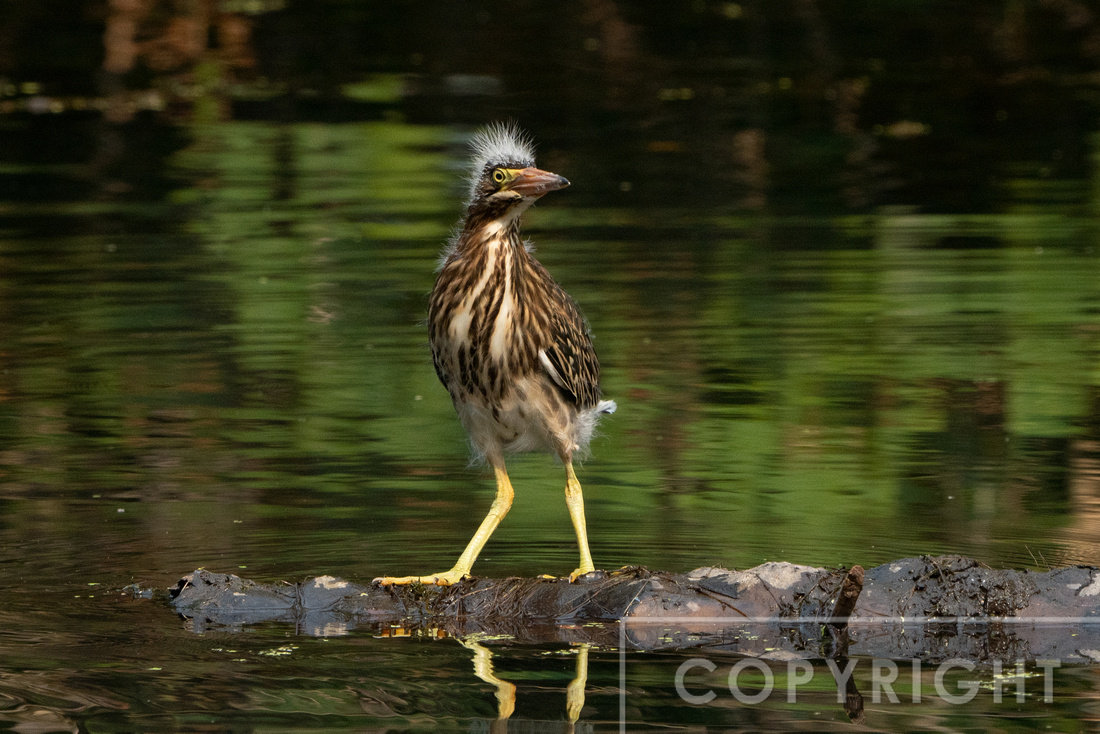 Drinking water, likely the first time, and learning how to hunt:

One of the siblings was not as fortunate: it likely did not understand the properties of water, and learned pretty quickly that you cannot stand on it:

This poor little one spent the next hour up on a sunny branch drying out its wings: 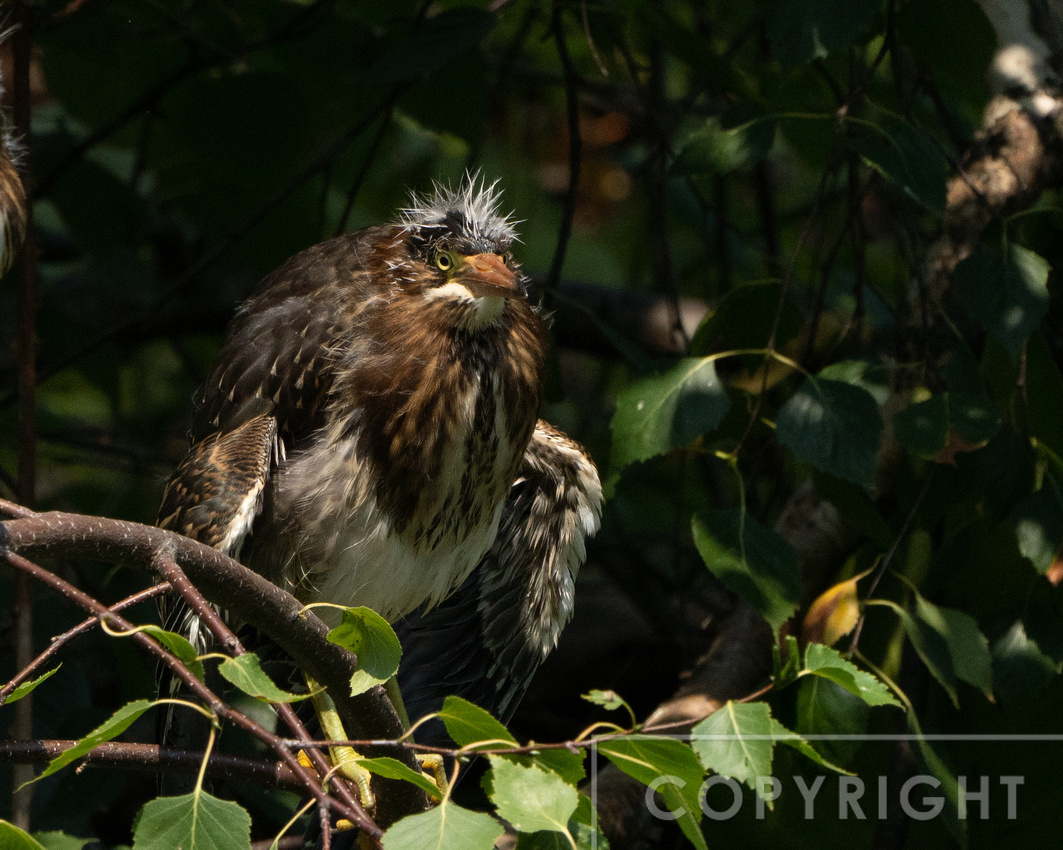 Day 26 - The chick on the left had caught a Dragonfly, but the one on the right decided to try to steal it away: 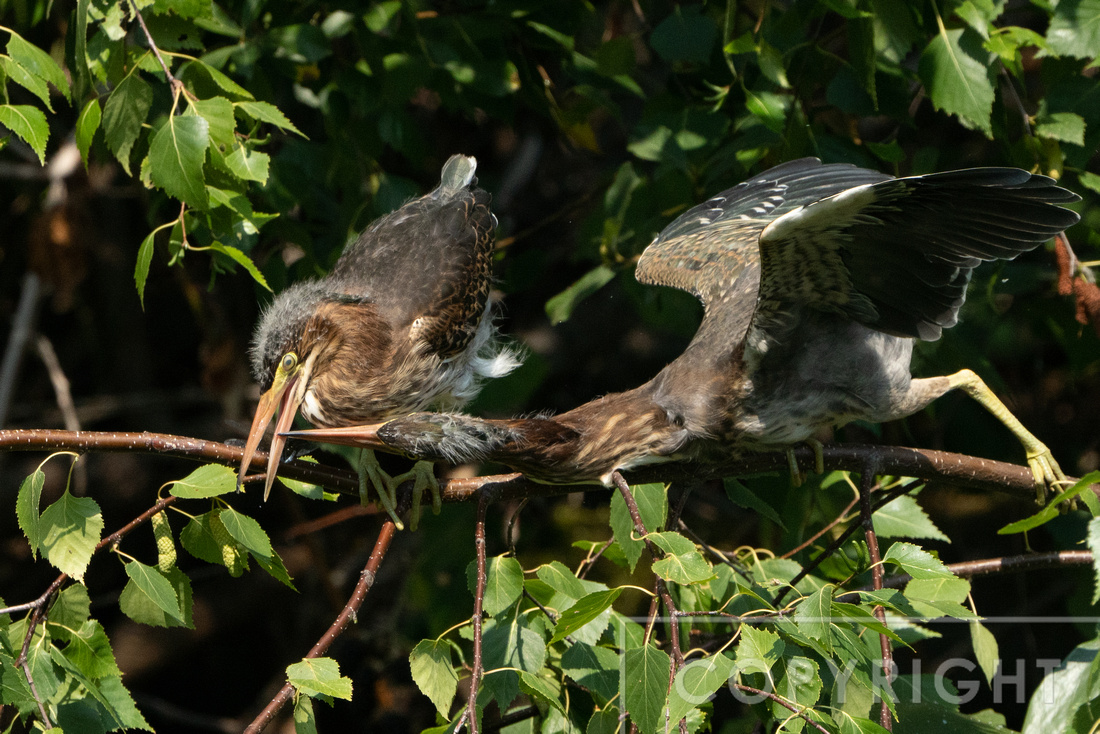 The were still hanging out pretty closely together, but no longer in the nest: 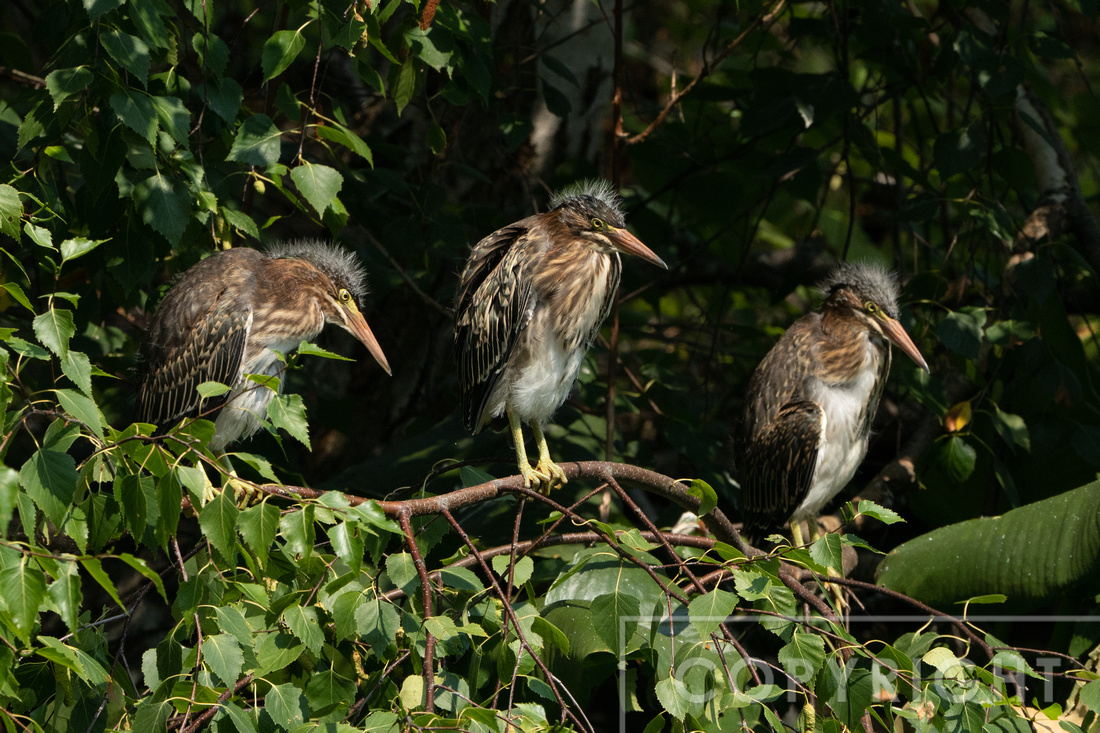 Day 27 - When I arrived in the morning I could not find the chicks. I finally realized that all three were in the huge Cottonwood tree on the other side of the river from the nest tree. They all had the hang of flying a distance: 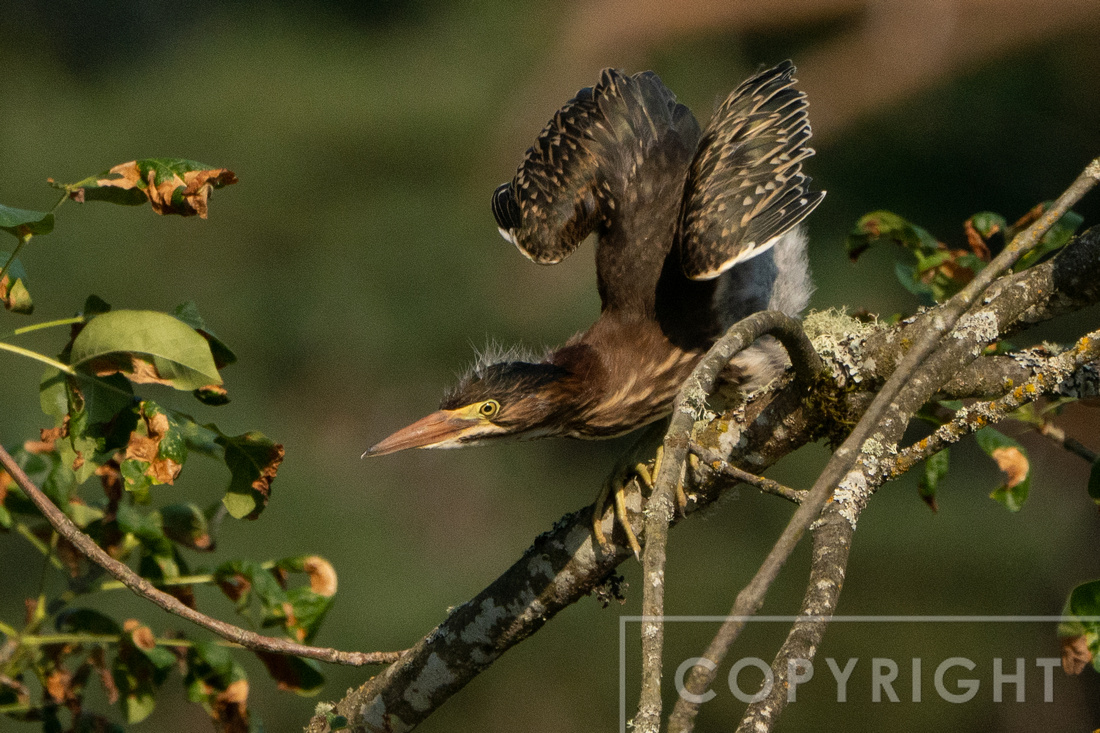 Two of the chicks flew off, but one stayed to explore the tree and environs. First order of business was practicing fishing: 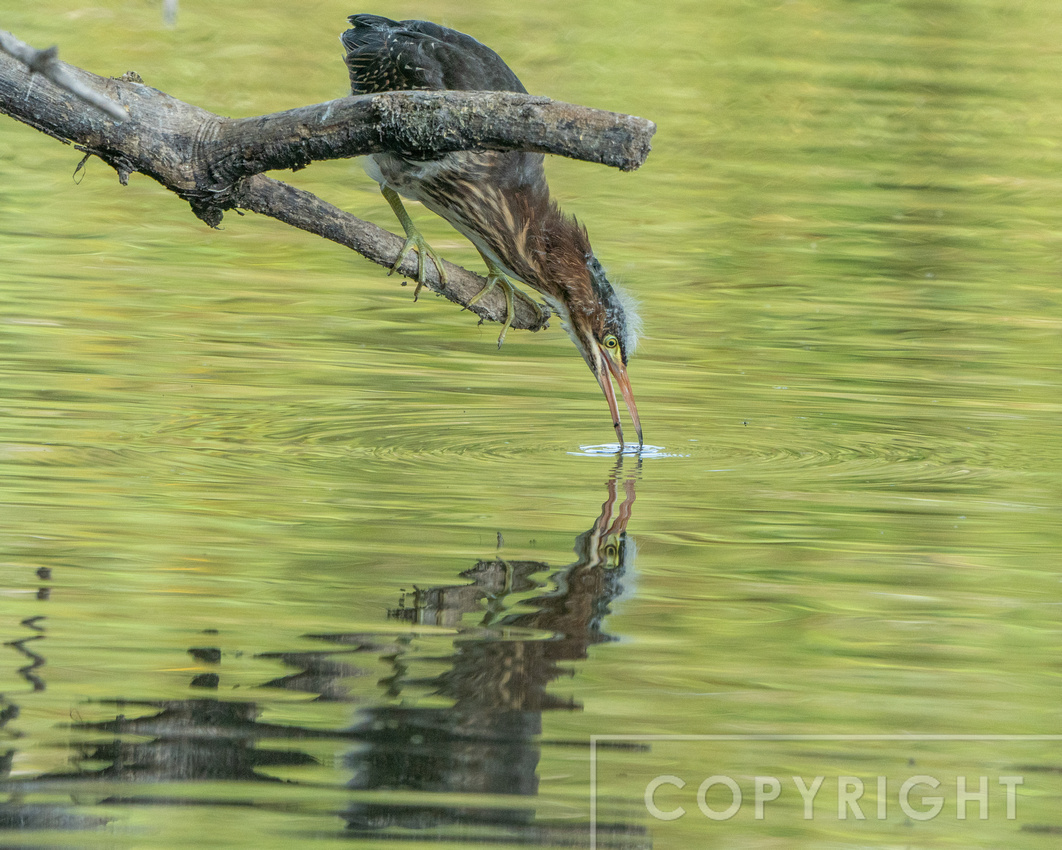 One trick is learning what to fish for:

As the chick proceeded to explore the tree, I set up my tripod nearby to follow its progress:

It also afforded me a one time opportunity for closeups. As the chick explored the tree, it had no idea I was quietly standing nearby (about 20 feet away): 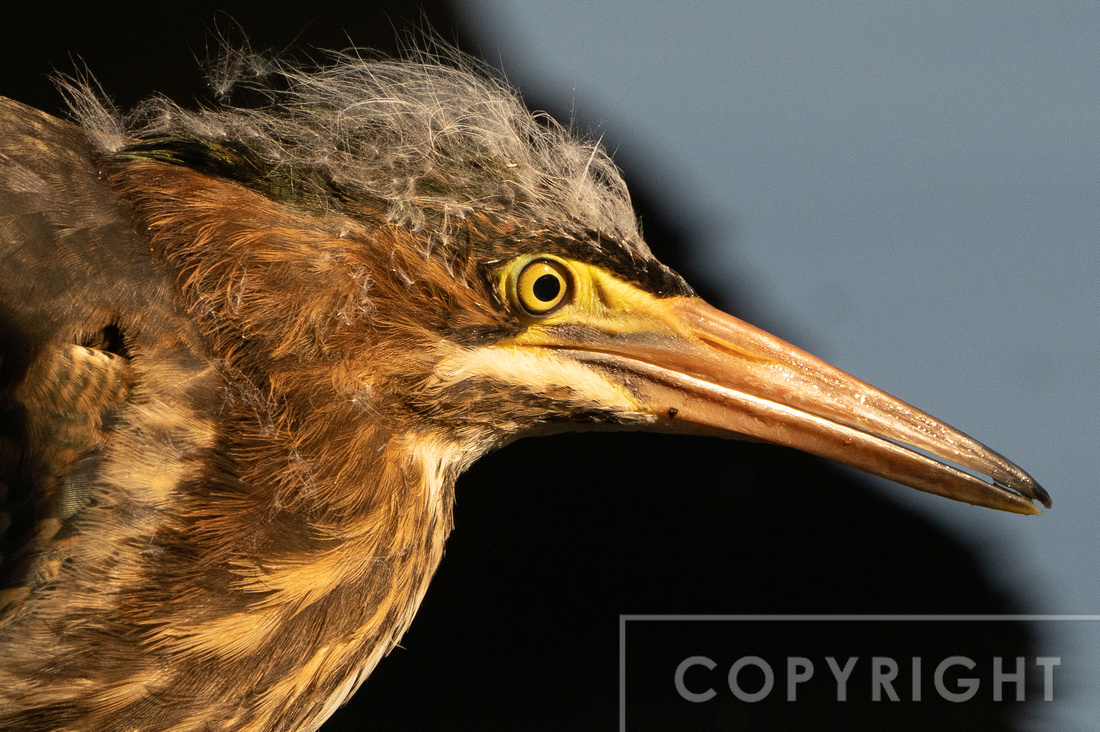 At one point he stared right at me, but I did not move a muscle, so he did not get frightened off: 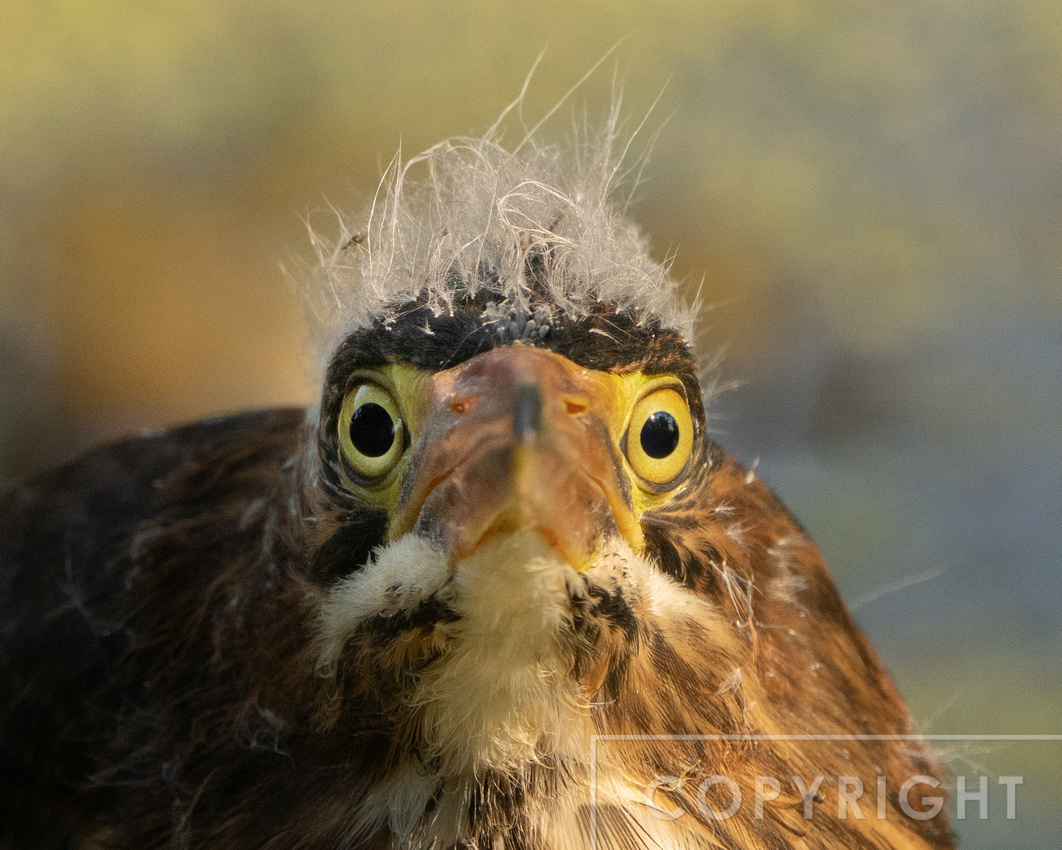 The chick explored the tree for another 15 minutes, but when it was ready to leave, I got my first shot of a chick flying upward, now able to defy gravity: 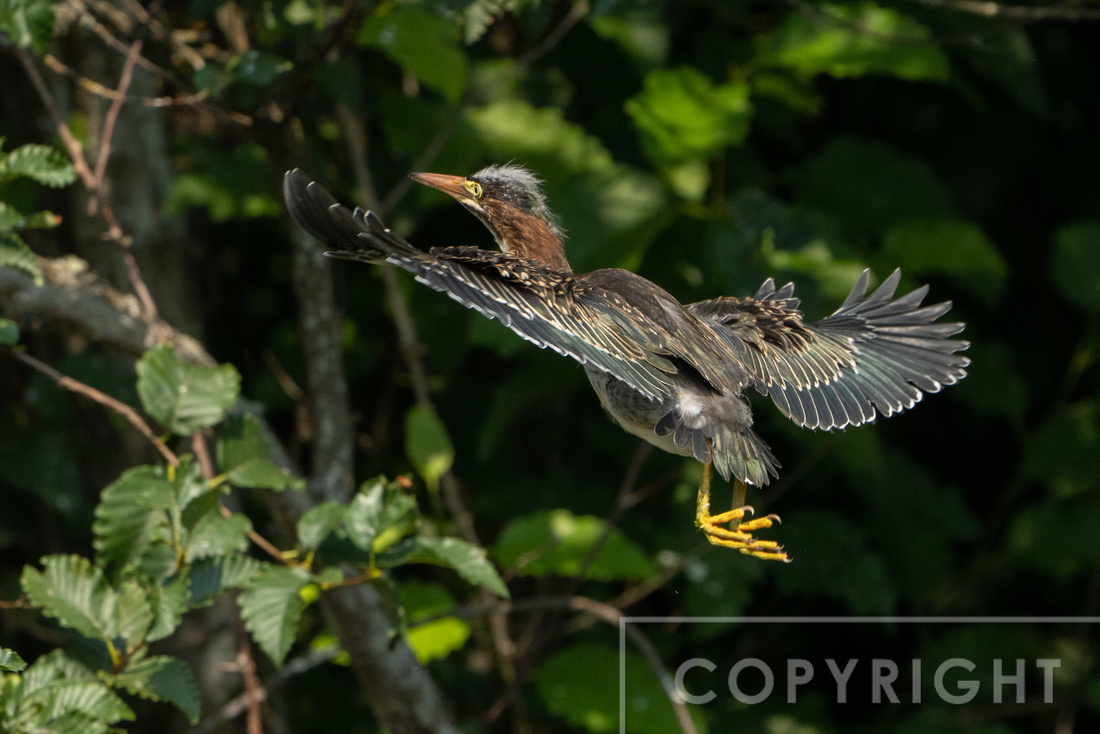 Day 28, one month old and still practicing that all important hunting skill: 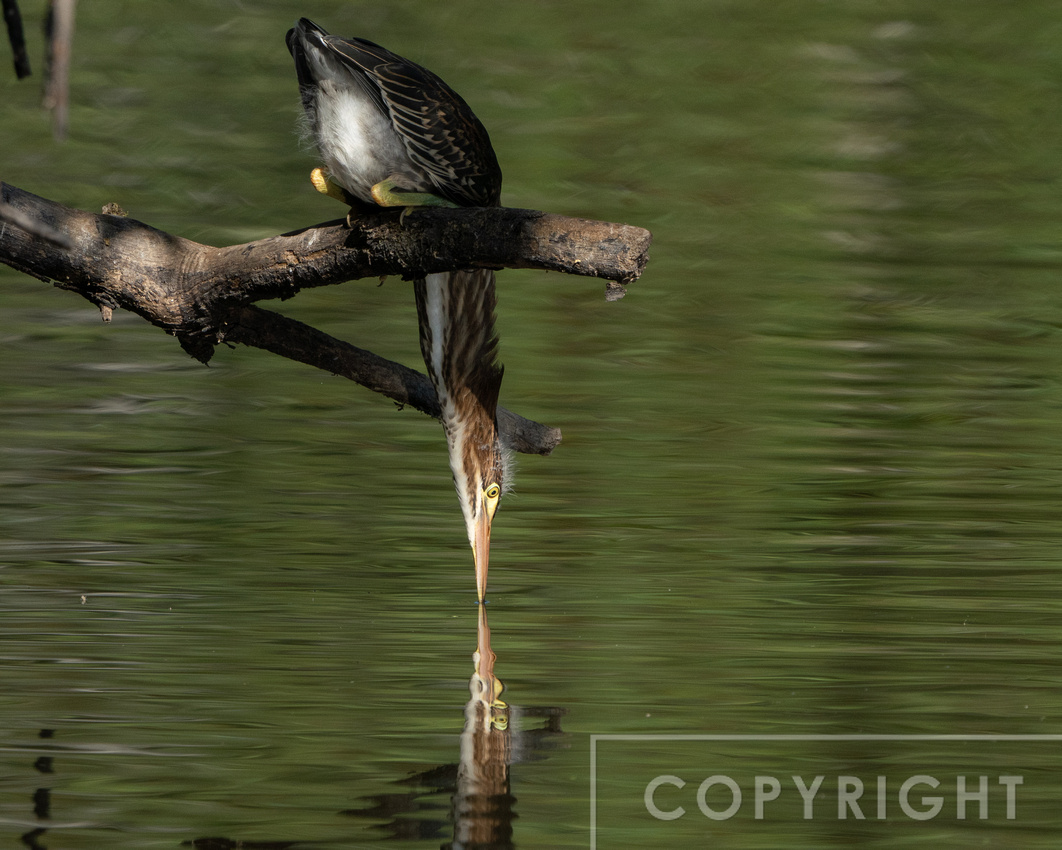 They were getting better and better at catching Dragonflies: 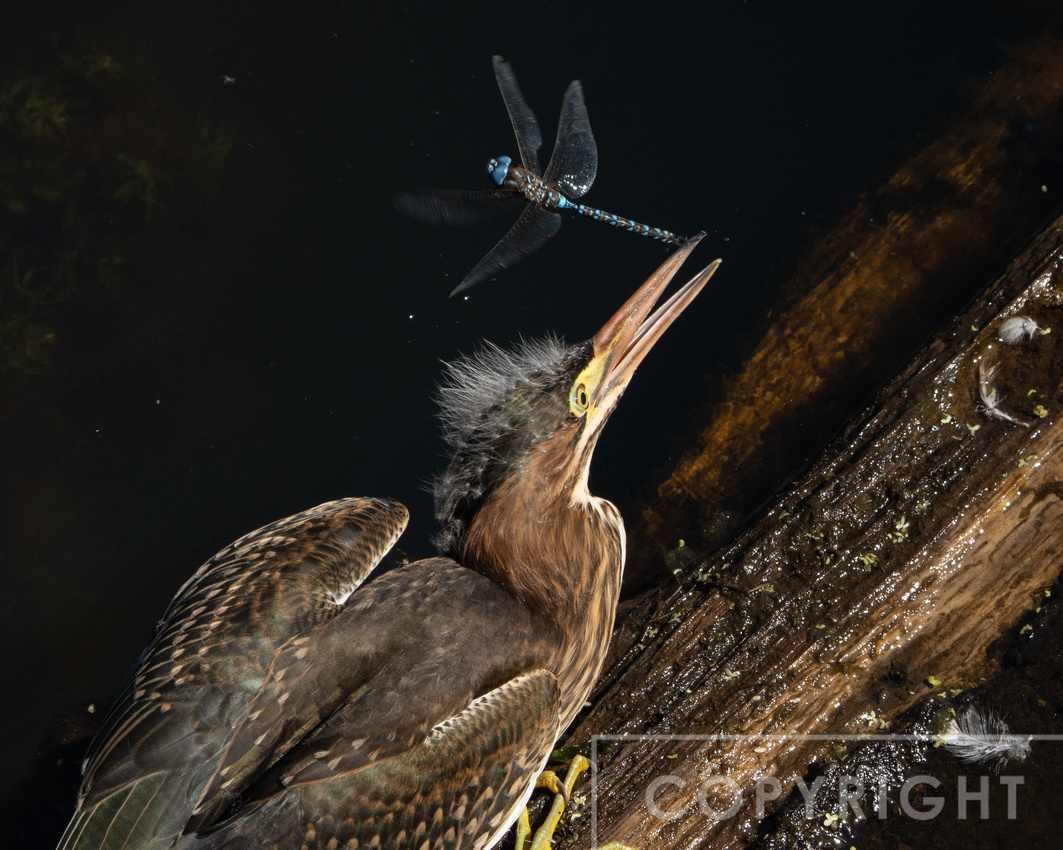 By Day 29, they were venturing farther and farther from the nest, and therefore harder and harder to photograph. But I was left with the great satisfaction that I got to watch these three chicks grow from hatching to fledging. I will likely never get an opportunity like this again, since it is very rare to have good visibilty into a Green Heron nest. But, I will return to the area next year in my kayak to get to see the Herons again. Have a safe flight south little ones!